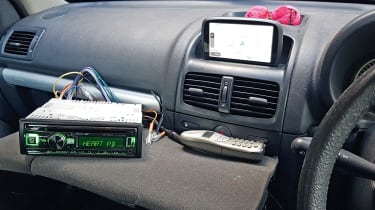 Adding digital radio to your car is one of the most popular in-car entertainment upgrades, because it breathes new life into an ageing sound system. Not only does radio sound better, but you get access to a host of extra digital stations.

Many head units will also feature Bluetooth hands-free calling and compatibility with smartphones. Around £100 will buy a new head unit, but don’t forget to budget for a suitable DAB aerial and any facia adaptor you may need to fit your car’s dashboard.

We hooked each DAB radio up to a test rig, and rated them on a varied route checking for reception quality. We then looked for features like Bluetooth (for making hands-free calls and streaming music), USB and aux sockets, plus basics such as a CD player. The final factor was typical selling price, taken from various sources as we went to press.

It’s a winning double for Pioneer with its MVH-X580DAB receiving our mechless Best Buy, plus the firm’s DEH-X7800DAB being our pick of the CD receivers. But it t was close and the mechless Sony DSX-A300BD DAB and the Kenwood KDC-BT710DAB CD receiver are both highly recommended in a top-quality field. 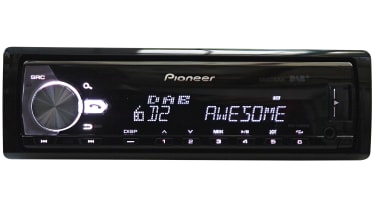 Our favourite head unit is this device, which does away with a CD player and brings a useful price saving. It’s cheaper than Pioneer’s disc-compatible DEH-X7800DAB, but you want for little else because it’s a great DAB tuner with many desirable features. The display isn’t the brightest or most impressive, although you get direct iPhone control and decent connectivity for Android devices. It can also handle two phones at the same time for hands-free calling – ideal if you have business and personal handsets. Plus, it has the necessary outlets to build a sound system. 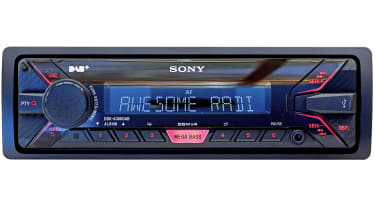 This unit is shorter than most, so is ideal if space behind your dash is limited. It’s also the one to buy to get the strongest DAB reception; we found it the best of our eight test head units. As with our winner, it doesn’t have a CD player and it also does without Bluetooth. USB and audio jack sockets allow you to source music from Android and Apple devices, plus MP3 players. A cracking price meant it closely matched our winner, but the Pioneer just had the edge. 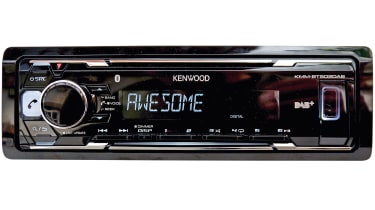 Highly visible display can be manually dimmed or controlled by the built-in timer. There’s good sound quality on strong DAB stations. Tuning is aided by the volume knob alphabetical scrolling after a long press of the ‘list update’ button. It also features dual phone pairing, iPod/iPhone control and Android app-based compatibility while a windscreen aerial is included, too. 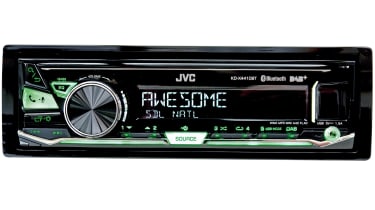 JVC’s model shares many of the features of the CD-equipped DB98BT, including full-time connection of two phones. Simplified Bluetooth lacks the latest integration tricks, although you get the same high-contrast LCD display. Tuner performance offers excellent stereo depth on strong stations, but would benefit from a roof-mounted aerial to pull in weaker frequencies. 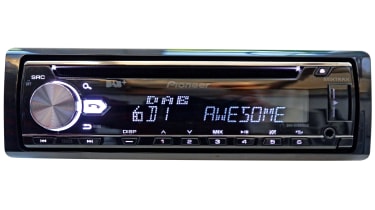 Drivers who still use CDs in the car should upgrade to this DAB head unit. We found radio reception to be on par with the excellent standard set by the mechless Pioneer (above), which uses the same electronics and settings. The DEH also has Bluetooth for hands-free calling, and you can pair two phones at the same time. There’s aux-in and a front USB socket to allow a wide range of devices to be connected. If you can’t do without CDs, look no further. 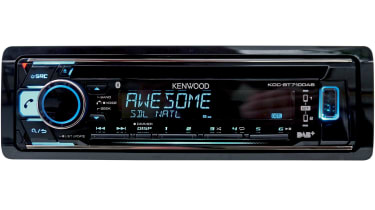 For the best Android or Apple smartphone connectivity, look at the Kenwood unit. It has Bluetooth streaming and hands-free calls. The DAB tuner worked well on nearest stations,

plus they can be listed alphabetically and scrolled through before selecting. It comes with an amplified screen-mounted aerial which works well, although it needs to be installed carefully to ensure you achieve the best radio reception. 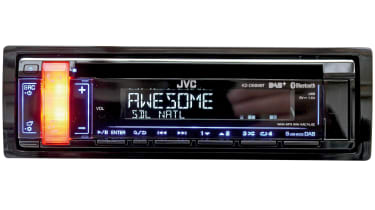 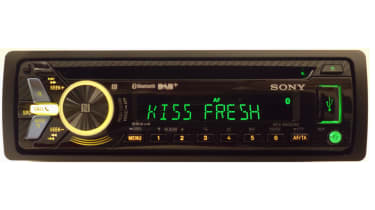 Sony's more expensive DAB head unit is thoroughly modern, despite the old-world CD deck. It has a smart carbon-fibre finish, and its controls are clear and simple to operate. However, it’s more geared towards Apple devices, because it’s fully compatible with Apple’s Siri, and we found it easier to use music apps via an iPhone. Track control through Android comes up easily, but using apps to show song and artist titles had mixed results.

Still, Sony gets full marks for the Android pairing using NFC (Near Field Communication) which does it all by touching your phone on the volume knob. It will also handle dual-phone connection, which allows you to call on one phone and use music apps on another. 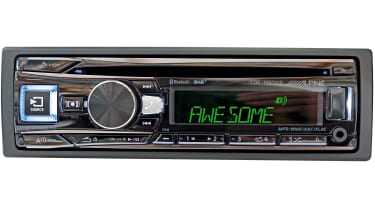 This unit’s higher cost is justified by extra features and a top-quality front panel. It uses Alpine’s ‘TuneIt’ Android or iPhone app for sound tuning. This is well suited to system-building with add-on amplification. It has lots of phone-friendly features, including voice and advanced iPhone control. The company sells a mechless UTE-93DAB version for around £150.