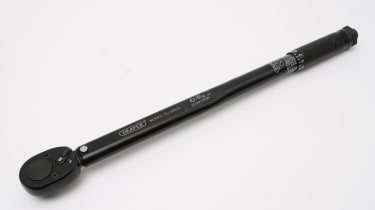 Black livery with the imperial and metric scales picked out in white makes this the easiest on the eye of the budget tools on test. Elsewhere, the ratchet head is large and the action stiff to the point where it couldn’t be moved by hand at times. Maybe this stiff ratchet led to the Draper’s poor performance in the accuracy tests. It struggled at the higher settings, with some readings outside the four per cent tolerance allowed by the British Standard. A shame as this is the best budget tool to use.