It’s vital to care for your tyres, but which is the best way to measure your tyre gauge and tyre pressure on the market right now? 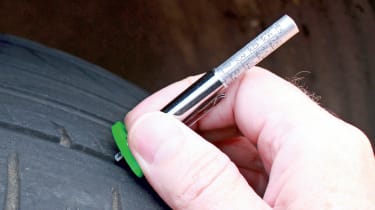 Looking after your tyres pays dividends because under-inflation may cause uneven wear and make them prematurely illegal.

To be within the law, a tyre must have more than 1.6mm of tread depth across the central 75 per cent of its width. The penalties for having an illegal tyre on your car are a fine of up to £2,500 and three penalty points for each one.

It could also cost you more than that because under-inflated tyres use more fuel and adversely affect your car’s braking and cornering.

Using a combined pressure and tread depth (DTG) gauge – or a kit containing both – is the simplest way to keep track of tyres. To find the best way to look after yours, we tried eight solutions.

We checked the tread-depth tools against an MoT-approved gauge on a part-worn car tyre (4mm), and tested the pressure element against a calibrated gauge at 20 and 30psi on a 15-inch car tyre. We also marked the scales, and wanted to see a case, as well as easy access to the tyre valves. Finally, we went through the instructions, looking for detailed information, including the legalities of tread depth and width, plus advice on checking tyres when cool.

Analogue still rules, and the PCL kit takes its second win. Sakura also retains its place, in second, with a digital gauge that performs well and comes at a great price, while the new Sealey digital unit finished up taking third spot. 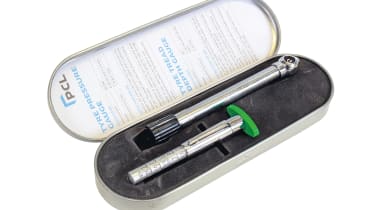 PCL’s twosome is seriously old-school; both products are analogue, but impressively accurate nonetheless.

The pressure gauge came with a plastic valve-removal cap and was spot on at 20psi and 30psi. Its angled head made it suitable for most tyres and, although you had to squint a bit to check the reading, that was made a bit easier because the scale read only in millimetres.

The separate VOSA-approved tread depth gauge was equally accurate, while the foam-packed metal case was useful, and the instructions included details on the tread limit and 75 per cent rule, but no advice about cold tyres. 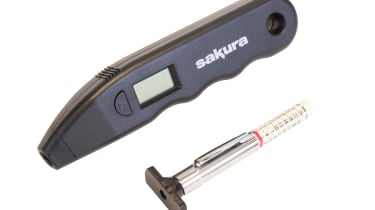 Sakura repeated its impressive performance from our most recent test with this digital/analogue combination. The digital pressure gauge was 0.5psi adrift at 20psi and perfect at 30psi. Although there was no light or backlight, it was a good fit on the valve and stayed live for a useful 30 seconds.

The separate analogue DTG was just 0.5mm off on tread depth, and the hexagonal scale was marked in metric and imperial units. Its instructions could have been better, given that they mentioned only legal tread depth, but the kit is still practical and easy to use, and comes at a great price. 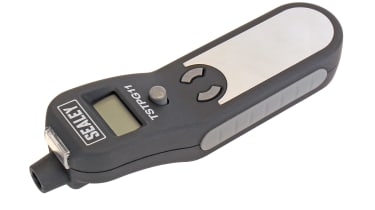 Sealey combined a four-scale digital pressure gauge with an analogue DTG, which extended from the handle of the unit. We liked its switchable LED light, the 30-second auto-off function and the easy and tight valve fit, although it would struggle on some wheels with deep-set sockets.

The pressure gauge was just 0.5psi high at 20psi, but spot on at 30psi. And while the DTG was a bit stiff at first, it was accurate. However, the instructions were sparse. 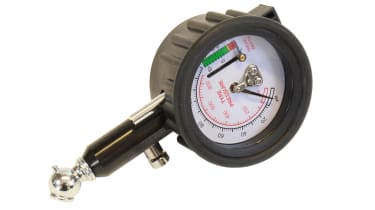 We liked the Racex design because it is similar to a previous test winner’s (RX0014), but protected by a thick rubber cover. It featured a valve-release button and the short nozzle was angled to suit most wheels, with the gauge showing just 0.5psi error in the two tests. The DTG was a metal rod that you manually pushed into the tread, and it was accurate.

Sadly, the instructions were limited and included none of our favoured facts. And although the dial was nice and clear, the needle was wide and the psi scale was in increments of two, which sometimes made it a bit fiddly to read. 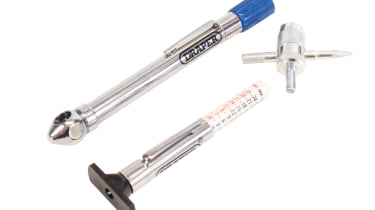 Like the PCL, this was a step back in time, including an analogue, pencil-style gauge with a plastic valve-remover cap and DTG, as well as a valve repair/thread-clearance tool.

The gauge read only in psi and felt a touch low rent, with markings that weren’t terribly clear. Even so, it got both 20psi and 30psi pressures perfectly. Draper’s DTG also didn’t feel that well made and read 0.5mm under. The instructions included the legalities, but not the advice on cool tyres. 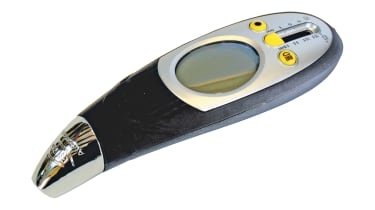 This is a great design – stylish and with an angled chuck that spins through 360 degrees. Its large screen was easy to read, being backlit in blue and with a switchable nose light.

It was the only one to feature all our instruction points, but it was 1psi and 0.5psi adrift in our tests. The plastic DTG simply pushed out from the base, but we really couldn’t get on with the scales. It was seriously tricky to check the reading, although ultimately it was close, at 3.5mm, rather than 4mm. 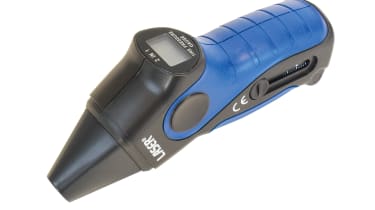 The pistol-styled Laser featured a digital pressure gauge which was 1psi over at 20psi, but correct at 30 psi. Its valve fit was good, but not angled enough for some wheels.

We liked the clear, backlit display, while the instructions covered the legalities, but not the need for cold tyres. The handle had a slide-out plastic DTG with a detent at 5mm, so checking 4mm of tread was difficult. An irritant at this price. 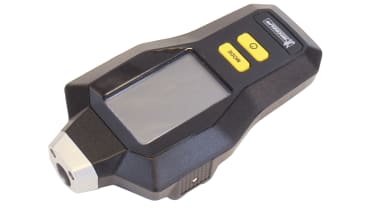 We liked the Michelin’s large display, but a backlight would have made it clearer, and there was no nose light. It fitted well on the valve, but could struggle on some deep-dished wheels.

In the pressure test it was 1psi and 0.5psi off, but the tread depth gauge wouldn’t read more than 3.4mm. The auto-off feature cut in after just 10 seconds, which was annoying, and the instructions made no mention of the 75 per cent rule.