Should you fit all-season tyres for 12 months instead of switching from summer to winter tyres? Our test has the answer 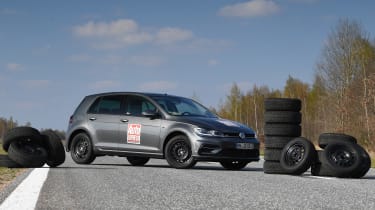 For many drivers, all-season tyres are the ultimate solution for our increasingly extreme climate. They can handle the heat of summer and its sudden storms, plus the wet roads and snowfalls of winter, all without the cost and inconvenience of swapping and storing an extra set of wheels and tyres.

Producers are well aware of drivers looking to cover all situations in the easiest way possible, and recently there’s been a rush of new all-season designs, including from companies that previously avoided the sector.

So which of these versatile performers is the best one to choose for your car as you contemplate the prospect of winter driving? To find out, we enlisted Nokian’s help and headed for test facilities in Finland and Germany to put nine to the test.

A change of size to 205/55R16 saw nine brands take part – up from six in the same test in 2018. Joining Continental, Goodyear, Michelin and Nokian (all tested last year) are new tyres from Hankook, Bridgestone, Cooper, Falken and Nankang. 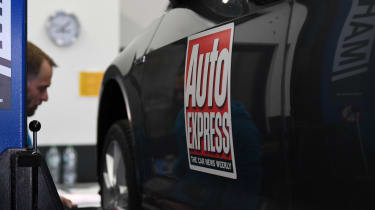 To ensure we test what you can buy, we invited makers to nominate a tyre, which we then bought. The Cooper was so new it had to be supplied, but we later checked it was the same as those on sale by buying a second set and comparing the two in wet braking, which shows any differences.

We also tested the winning summer and winter designs in this size to assess other options. We had a mix of H and V speed ratings (up to 130 and 150mph), and we’ve listed the compulsory EU label ratings. Fuel economy (FE) and wet grip (WG) are rated A-G, with the former the best. Noise is measured outside the car and rated in decibels, so the lower the number, the quieter the tyre.

How our tests work

The main reason many motorists consider all-season tyres is the threat of snow because getting to work or home when the roads are covered in the white stuff is key. To find the snow stars we headed for Nokian’s extensive White Hell proving ground inside the Arctic Circle in Ivalo, northern Finland. Here we tested handling, as well as traction and braking. The handling track combines major elevation change with fast, undulating sweeps, plus slower direction switches to explore all aspects of a tyre’s performance. Average lap times produced the result. 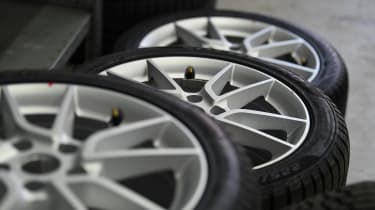 Traction and braking were done at the same time, accelerating from walking pace to just over 22mph before hitting the brakes. The time taken to hit our target speed was measured, as was the distance to stop. An average from multiple tests gave the result. Sadly, the weather played havoc with our test programme so we were unable to include our usual snow circle test.

Similarly, the weather thwarted our attempts to complete the temperature-dependent braking and handling tests at winter levels, because the ambient temperatures were just above the 7˚C crossover point where the advantage switches from winter to summer designs.

At the ATP Papenburg motor industry test facility in Germany, we measured the distance it took to slow from 80-20kph (50-12mph). This avoids the inconsistencies that can arise in the last few metres of a stop. Multiple tests were done, with an average taken after outliers were removed. 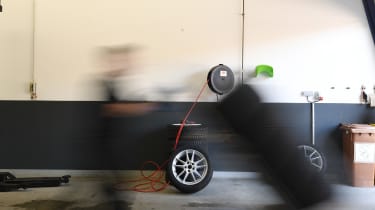 To assess handling, the ATP track includes a range of corners combined with changes in water depth and surfaces. Lap times were at the heart of this test, with an average taken from several runs. Track availability prevented us doing our usual wet circle test. Curved and straight aquaplaning tests were done by Nokian drivers at the tyre company’s Nokia proving ground in Finland.

Just as in the wet and snow, we did multiple stops around ATP Papenburg’s banked oval track, measuring the distance taken to stop from 62mph, with an average giving our result. Handling was rated at the ATP track, which mimics the German-GP hosting Hockenheim circuit. It comprises a variety of curves and corner combinations, including the banked turn, and the result depended on lap times.

The EU test focusses on environmental concerns, but our assessment covers cabin noise. The passenger headrest was fitted with microphones, and noise levels measured at several speeds to calculate what it would be at 50mph. 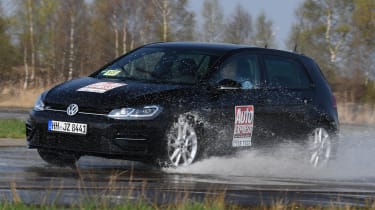 Our test is done to industry standards using an average of two tyres. Essentially it measures how easily a loaded tyre rolls. The more resistance, the more power and fuel required to move the car. A one per cent change in fuel use equates to around a five per cent difference in rolling resistance.

Our online tyre retailer test winner Black Circles provides the fully fitted prices. They are its price at the time of writing, or what it would charge if a tyre is not part of its range.

As with our winter tyre test, we have refined our scoring. Essentially we add up the various results from each of the tests expressed as percentages because this accurately reflects the performances.

These tyres are for all-year-round use, so the snow performance is 10 per cent of the overall result, with 45 per cent making up the wet results, and the rest split between the other tests. Where we had to choose, we emphasised the braking and handling tests. In individual tests, the winner gets 100 per cent, and the rest are ranked relative to that.