The Gen-2 Vector 4Seasons has been with us since 2015, when it took the runner-up spot in our first all-season test 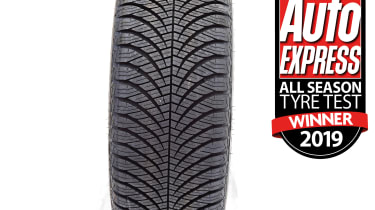 The Gen-2 Vector 4Seasons has been with us since 2015, when it took the runner-up spot in our first all-season test. It went one better the next year and has not been out of the top three since. It is more old-school than recent arrivals from Continental and Michelin, with stellar performances in the wet and on snow, and doing enough in the dry to secure the win.

No doubt Goodyear has been developing the Gen-2 over the past four years or so to meet the new summer-focussed challenge, and it takes its second win here. No other tyre has taken separate victories so far apart.

It had a clear advantage on wet and snow-covered roads. On the former in our handling test it had grip challenged only by the Michelin, with impressive traction out of turns and a rear that stayed in line longer than rivals. It also maintained that advantage in the deep water of the aquaplaning tests, securing two podiums close to the leading Nokian.

The challenger role was taken by Continental at the White Hell, where that impressive traction was again present, with a secure rear that gave confidence through tight turns. As we’ve seen before, the wet and cold stars struggle in the dry, and the Vector 4Seasons wasn’t sharp around the circuit, requiring lots of lock to combat a lack of front grip. Goodyear rounded off a great performance with a win in cabin noise, and fuel consumption less than a couple of per cent off the winner. A remarkable result from an older tyre and it secures Goodyear a second win of 2019, backing up its winter-tyre success.

Blackcircles.com says: A popular tyre, and reviews focus on wet and dry grip. The range, including the SUV version, comes in sizes up to 19 inches, and customers have given it an overall score of 4.7/5.