The change in tyre size suited Falken in its second winter test appearance; it finishes a couple of places higher and a few percentage points closer to the winner. 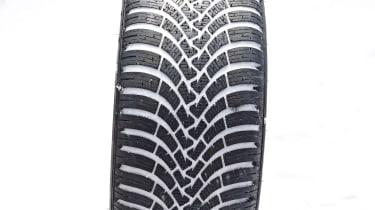 The change in tyre size suited Falken in its second winter test appearance; it finishes a couple of places higher and a few percentage points closer to the winner. Deep water is where the Eurowinter is happiest, taking both the aquaplaning tests, which helps it to third place in the wet. It struggles more in the shallower water of the handling track, where it lacks grip in turns and on acceleration. It tops only the Toyo in the snow where it has a good balance but lacks bite compared with the best.

It’s back at the rear of the pack in the dry, feeling soft around the handling track although its time is close to the best. However the elephant in the room is fuel economy. It was poor in the last test, but it’s further off the pace here, using around seven per cent more fuel than the Nokian.

We say: Good in the wet, but fuel economy needs addressing

Blackcircles.Com says: This model isn’t well known at present, so there hasn’t been a great number of orders for this tyre. But motorists who have bought the Eurowinter have left positive reviews.