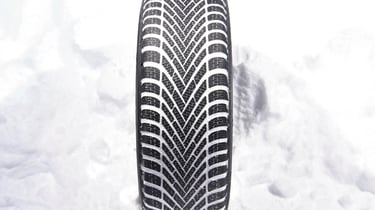 Last time we tested this Pirelli it finished joint third. While it dropped a place this year, it is closer to our winner.

As in 2018, it was strongest on snow, where it put in the best performance on test. It wasn’t off the podium in the three tests and felt the best around the sweeps of the handling track. An effective front end with a well controlled rear was the secret to its success, allowing faster

entry. Good traction on lock helped on the climbing turns. There’s little between this and the Goodyear and Falken, but the Cinturato and the UltraGrip are the ones to go for if snow performance is key.

The Pirelli and Goodyear were closely matched in the wet, too. The latter had a small advantage, but both were around four per cent off the leader. On the wet circuit, that grippy front end was again present, as was the stable rear. That front grip remained as lock was increased, too.

Dry performance was further off the pace, with the Cinturato needing more than two metres more than the winner to stop. More worrying was economy – about four per cent off the best, and worst here.

We say: Good snow performance is offset by mid-pack wet-test results. Fuel economy needs addressing if it is to challenge the best.

Blackcircles.Com says: This is not a particularly high-selling model, but customers who have purchased the tyre have left very positive reviews. Focusing on wet grip, they give it a score of 4.9/5 overall.