Although helping to provide improved fuel economy, the Nokian WR Snowproof isn't the best choice for a capable winter tyre 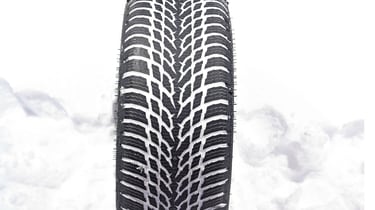 When we tested the then-brand-new Snowproof last year, we questioned the performance targets the Finnish producer had set for its latest winter tyre. And we do so again after this year’s test.

The Nokian starred in the fuel economy test, where it used around two per cent less fuel than the next best. Although that’s great for high-mileage drivers, potential buyers may well question the price you have to pay in other areas for that advantage at the pumps.

The trouble is that the winter specialist’s usual pace-setting performance on snow has gone. The Snowproof ended up finishing in sixth place across the snow tests, some three per cent behind the best. At the wheel, you could feel that lack of grip, the Nokian requiring lower entry speeds than most, with the front easily pushing wide. When it did grip, the rear moved.

It was even further off the pace in our wet tests, finishing around six per cent behind the leaders in last place. The weak front grip was there again, and you needed to wait for it to hook up before you could accelerate away.

The Nokian also propped up the results in the cabin noise test. However, as you might expect, it fared better in the dry, taking a podium finish, just under two metres off the leading Bridgestone.

We say: Remarkable fuel economy deserves credit, but is this what drivers want when buying a winter tyre primarily for superior performance in poor conditions?

Blackcircles.Com says: This is not a tyre that we sell, which means that we are unfortunately unable to provide any insight into its popularity or performance with our customers.