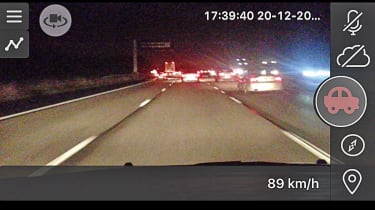 CamOnRoad performed well a previous magazine mini test, as it allows you to store four hours of footage on a cloud-based account. The large record icon made it easy to start capturing video, and the navigation function overlays route guidance and points of interest, such as petrol stations, on to the screen. But rivals have moved the game on by automatically restarting video after you use other phone functions, so while we’ve awarded this app four stars in the past, it’s now left trailing.