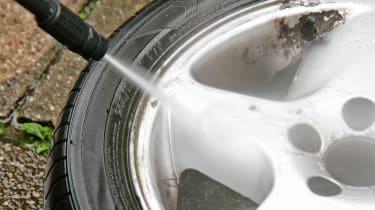 There’s nothing like a pressure washer to take the strain out of car cleaning, but even if you own one, a stream of new models can tempt you to upgrade.

Makers aren’t just chasing higher outputs, but also safety; too much power can damage a car. Kärcher has its own pressure monitoring and guide system, and rivals are offering more compact units, hoping to draw buyers with limited storage. So which of the class of 2019 should you buy to make cleaning easy? We tried 10 of them to decide which was best.

We checked cleaning power on paving, but grunt isn’t key for car cleaning; our test was more about ease of use. Hose lengths were measured and storage for leads and hoses rated. We also wanted on-board accessory storage and detergent reservoirs, plus good-length lances. Prices from online sources were also a factor.

GMC’s GPW165 wins because it’s a well-priced, complete package. The tiny Hozelock Pico Power is close behind, and our previous champ – the Kärcher K4 – still manages to stay on the podium. 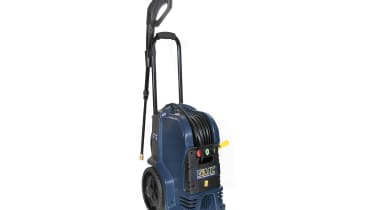 Other machines may pack a bigger punch but the 1800W induction motor delivers 165 bar pressure, which is more than enough for car cleaning. The PW165 also has a turbo nozzle for tougher jobs like cleaning brickwork. It packs an eight-metre hose wound round an easy-to-use reel – there’s no messy coiling of gritty pipe with this washer – as well as a storage reel for the generous 10-metre power lead.

The package is also remarkably comprehensive for a sub-£200 machine. It includes several nozzles, covering rotary, spot jet, fan and low pressure for the onboard soap tank. There’s also a flow-through brush that’s ideal for car cleaning, and a rotary version for paving and the like. Its specification, performance and value are great, which makes this a winner. 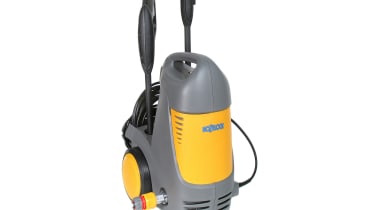 A price cut since our test last autumn makes this pint-sized washer even more attractive. This is another well thought-out machine, which packs a 1,700W motor punching out 140 bar. The cleaning is impressive for such a diminutive machine. It’s well packaged, too, with spaces for turbo and standard nozzles, and places for the six-metre hose and five-metre power cable. The lance cleverly acts as a handle to wheel the machine about. 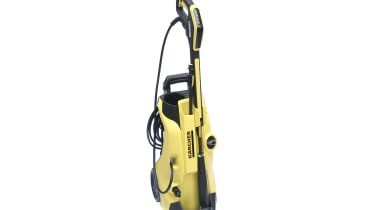 This former winner has to be content with a commendation, facing newer, cheaper rivals. Uniquely, its Full Control lance has a display to indicate the kind of job the current pressure setting should tackle. The package is good, too, with a decent patio cleaner included alongside both fan and rotary nozzle options. It’s still a decent performer in our tests, but a reel for the six-metre hose would be good at this price – or even at the level of deals online. 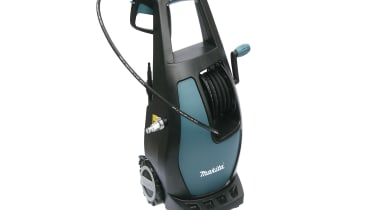 While some makers seem to refresh their offering every year, Makita prefers a more ‘if it ain’t broke, why fix it?’ approach. We’ve been testing this since 2013 and it’s still a favourite. Its quality was the best on test and, while not as compact as the Pico, its very squat design makes it pretty stable when pulling the five-metre hose from the built-in reel. There’s good storage for accessories, too, so it’s a great package at a decent price. 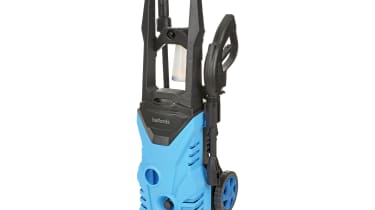 This budget washer is short on frills, but we still came away impressed. You get just one lance and no turbo options, although there is a soap dispenser to fit. This works well, with thick foam using dedicated pressure washer shampoo, but the 250ml bottle empties fast.

Storage is basic; the lead winds around a holder on the back. The five-metre hose can also go round the holder, or simply loop over the handle. Putting both away takes time.

Still, we were impressed with the 1,600W motor’s cleaning power. And the adjustable lance goes down to a needle jet – not ideal for car washing, but even open a little, it had more punch than the K2. At just over 6kg, it is easy to move around, which you’ll need to with most cars. A good, cost-effective option 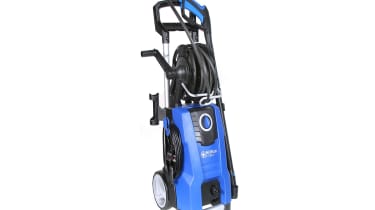 Winner of our money-no-object award. Performance is staggering and everything about the Nilfisk unit is ergonomically brilliant, simple and durable – such as the bar in front of the nine-metre hose’s reel, which prevents it from being unwound unless you tug downwards, stopping the machine tipping forward. It also straightens out loops and twists when you draw the hose back onto the reel. The perfectly graduated pressure control on the lance is another excellent feature, making setting it a doddle. But for nearly £300, we’d expect more than just a turbo and detergent nozzle to be included. 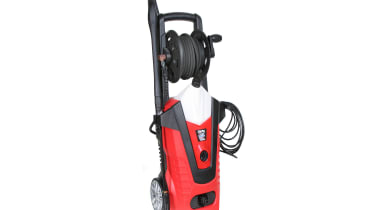 The Jet9500 replaces the Jet9000 we included in our 2016 test and, at first glance, it seems that Clarke hasn’t addressed our biggest criticism of the old machine: the stark package only comes with a single adjustable fan nozzle. However, the 9500’s extra cleaning bite makes turbo nozzles and patio cleaners redundant, such is the awesome power from the standard lance. The trouble is, we found the pressure control on the lance pretty ineffective, meaning the only way of taming the machine – for safer car cleaning duties – is to select a ridiculously wide, and rather messy, fan. 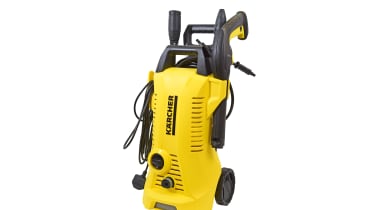 The Car version of the K2 washer costs £89 in Halfords, or a standard model is a similar amount online. The Home and Car variants bring accessories to boost versatility. Our Full Control Home had a patio cleaner and 500ml of grime-shifting solution. The Car gets a flow-through brush, plus suitable cleaner.

Both have a second high-pressure lance, plus the Full Control version for car cleaning. It usefully indicates the pressure required for jobs, yet the most powerful mode trailed some of its rivals; it was still safe with little risk of tyre or trim damage. Handily the lance can also be used to switch to soap delivery, but the spray was watery even though we used the same wash as the others on test; the Car version’s lance-mount would be more suitable.

Storage is comparable but Kärcher has skimped with a four-metre hose. This is more versatile, but there is a premium to pay. 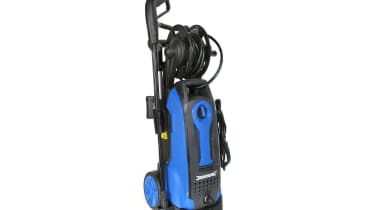 The Silverline is the cheapest pressure washer in the group, so it’s a surprise that the five-metre hose has a built-in reel, that you get a three-year warranty and that there’s a thumping 2,100-Watt motor. Budget models don’t usually come so well specified. And overall build quality is far better than you’d expect for a machine at this price level. So how has the maker kept the cost so low? Well, extras are non-existent; you only get the standard lance. And this will be problematic for anybody tackling tougher jobs around the home because the unit lacks enough bite to handle such surfaces effectively without the aid of a turbo nozzle. 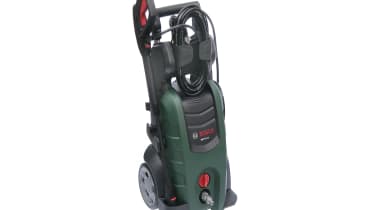 A surprise slide down the ratings for this Bosch model compared with the last time we tested pressure washers, even if it is still a good all-round choice. As with the Makita HW111, cleaning output is punchier than its modest ratings suggest, and Bosch hasn’t been stingy with the extras. As well as the standard and rota nozzles, it includes a patio cleaner and a jet mounted at 90 degrees that’s perfect for cleaning under sills. But with hose reels almost standard on most models, this one’s clip arrangement – to retain the seven-metre hose – is fiddly. And in use that hose is surprisingly easy to kink.