As the number of accidents related to dazzling headlights rise, we call for more action to end the sale of HID conversion kits in the UK 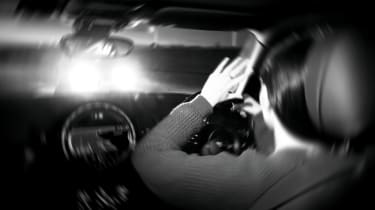 We first tackled the problem nearly a decade ago in January 2007. Back then, we highlighted the potential legal and safety risks posed by these kits, which can make your car unroadworthy, invalidate your insurance and, according to the Chartered Trading Standards Institute (CTSI), hold owners civilly and, potentially, criminally liable in the event of an accident.

But we’ve now revisited the issue and found no evidence of subsequent enforcement and, furthermore were told there appeared to be little appetite – nationally and regionally – to undertake future action. Road safety organisations are concerned, though, and the stats indicate that dazzling headlights are a contributory factor in accidents. 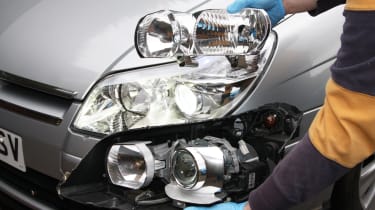 Department for Transport (DfT) figures show the number of incidents influenced by headlamp dazzle rose by 11 per cent in 2014, compared to 2010. David Williams, of the road safety charity GEM Motoring Assist, told us this might not be the whole story, either. He said official statistics are problematic to interpret, because they are compiled by police officers at accident scenes.

Dazzle can also result from a poorly adjusted lamp or main beams not being dipped, for example. But Williams pointed out that anecdotal complaints about dazzling headlights are rising and the popularity of HID conversion kits is contributing to the safety risk. The Royal Society for the Prevention of Accidents (RoSPA) agrees with these safety concerns, too.

Figures show number of incidents influenced by dazzle rose by 11 per cent in 2014, compared to 2010

The DfT’s most recent information sheet on the issue, dated May 2010, confirms that HID conversion kits create dazzle and are illegal to sell, install and use. Some traders use a disclaimer with the sale of kits saying they’re for off-road use while simultaneously detailing their benefits for improving visibility of road signs, fellow drivers and other obstacles. The Institute of Advanced Motorists (IAM) accused these sellers, and the practice of advertising kits as on-road safety aids with an off-road use disclaimer, as being “misleading and disingenuous”.

How HID conversion kits can damage your car

There’s also evidence to suggest that the kits can damage your car. According to Lukas Küpper, Philips Automotive’s senior lighting engineer, an incompatible bulb from an HID conversion kit can also damage a halogen headlamp internally through excessive heat generation and ultra-violet radiation. The vehicle’s wiring may also not be a match for the different current loadings.

As part of our investigation, we approached several respected British retailers currently selling HID conversion kits with our research, including Autolamps-Online and Demon Tweeks. None of them could justify the sale of kits for on-road use, yet at the time of writing, none had subsequently de-listed the parts from their websites. 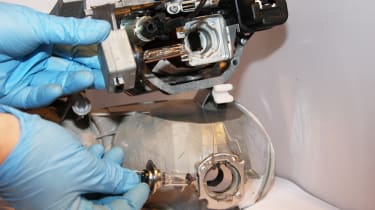 Other traders directed our research towards overseas sellers of inexpensive kits on online auction sites, which may act outside UK and European jurisdictions. We contacted eBay UK, but a spokesman simply told Auto Express that sellers are expected to comply with all laws.

The police and several Government departments responsible for Type Approval recommended we get back in touch with Trading Standards, so we investigated what action might be taken on a local level.

Having witnessed HID City Limited promoting HID conversion kits as a safety aid for several years at motor shows, we contacted the company with our evidence and that of the DfT. Several months afterwards, the business was still selling the kits advertised for on-road use, despite telling our researcher that it would no longer do so.

Therefore, we contacted East Sussex Trading Standards to establish if our research was sufficient to justify any formal action. After considering our findings and conducting its own investigation, Trading Standards visited HID City’s premises and, subsequently, the kits were withdrawn and the company closed its website voluntarily. The investigating officer also concluded that his interpretation of ‘off-road use’ involved vehicles that are not type-approved for road use, such as buggies and motocross bikes.

Our investigation has highlighted the need for HID and LED conversion kits to be withdrawn from sale for road use. Unfortunately, with budget cuts and a lack of will from the relevant authorities, there remains little to no enforcement of the dangerous practices of selling, fitting and using them.

That’s despite the DfT figures highlighting the growing threat of dazzle and the concern of road safety organisations. We advise all car owners to avoid them at all costs to stay on the right side of the law. 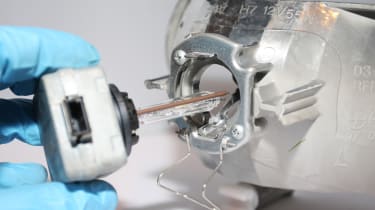 HID conversion kits are promoted as an aftermarket upgrade for halogen lights. The HID gas discharge burner is equipped with a halogen bulb-type base, allowing it to be fitted within a headlamp housing that contains optics designed only for filament bulbs. The kit includes a ballast unit that has to be integrated into the vehicle’s wiring to regulate the varying power demands.

Prices vary considerably for HID and LED conversion kits, with some promising bigger performance upgrades. But regardless of how much you pay and maker claims, not one of them can comply with the required regulations and they remain neither legal to sell and fit to road vehicles, nor to use on the road. The only legal way to upgrade headlights is to replace the unit completely.

What does the law say about HID kits?

While we understand that no test case has been brought to the UK criminal courts as yet, our research uncovered no defence to justify the sale, fitting and on-road use of HID conversion kits. Even when asked, not one retailer – or vehicle lighting specialist – provided Auto Express with any counter legislation or legitimate rationale.

The European Commission confirmed to us that only Type-Approved lighting systems can be sold legally in the EU under UN Vehicle Regulations (1958). And the Vehicle Regulations and Transport Innovations Section of the United Nations Economic Commission (UNECE) said one reason why the required Type Approval cannot be granted to HID conversion kits is that the bulb type and its base do not match.

As the kits are incompatible with halogen headlamp optics, they are unfit for purpose – falling foul of the UK’s Consumer Rights Act of 2015. 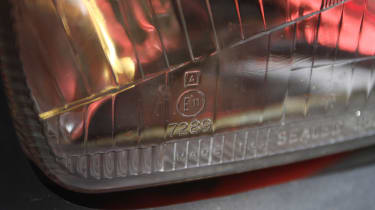 The UK’s Road Traffic Act (1988) cites that it is an offence to supply, fit or use vehicle parts that do not comply with the required Construction and Use stipulations.

And as the driver is responsible for ensuring a vehicle’s roadworthiness (under the Highway Code), a prosecution could result under Road Vehicles Construction and Use Regulations (1986) and the Road Vehicle Lighting Regulations (1989). Plus, the act of selling a conversion kit might incite the driver to commit an offence, so this could lead to wider legal issues.

Although it’s possible for a car fitted with an HID conversion kit to pass the basic MoT headlight alignment test, a pass certificate does not mean that the car is roadworthy, because the standards are not the same as those applied by the relevant mandatory Type Approval.

An HID conversion kit would cause a car to fail the UK IVA test, making it non-roadworthy

The Driver and Vehicle Standards Agency (DVSA) confirmed to us that an HID conversion kit would cause a car to fail the UK Individual Vehicle Approval (IVA) test, making it non-roadworthy. Some insurance brokers reported that on-road policies might be affected, and one company told us it would refuse to issue cover with an HID kit declared as a modification.

The Association of British Insurers commented: “Applying for, or renewing, insurance knowing that the vehicle is illegal, or non-roadworthy, would amount to misrepresentation and fraud.”

What do you think about the problem of illegal HID headlight conversion kits? Let us know in the comments section below...

How to scrap or recycle your car, and what prices to expect from the scrap yard