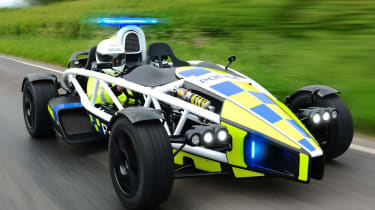 Ariel has released a one-off police version of its trackday car, the Ariel Atom, following a tie-up between itself, the Avon and Somerset Constabulary and the Safer Rider campaign.

The Ariel Atom PL is based on the regular Atom 3.5R, but its Honda engine has been tweaked to produce 350bhp instead of the standard 245bhp, meaning the Police Atom will go from 0-62mph in 2.6 seconds. It also features a police livery plus functioning sirens and blue lights.

Ariel will launch a motorbike later this year, and company director Simon Saunders said he had - like other manufacturers who have also lent their cars to the police to highlight road safety - got the company involved with the Somerset-based Safer Rider campaign to raise awareness among motorcyclists about road safety.

"Our business is about going fast, very fast, but there is a time and a place," said Saunders. "The Atom is designed to be driven to a race track, where you can drive to your limits in safety and in a professional environment designed for the purpose. The road really isn’t the place to explore your or your vehicle’s limits.

"We're just about to launch an all new Ariel motorcycle and we want our bikes and customers to be as safe as they possibly can be as well, so this message is important to us. There’s always one certain loser in a motorcycle collision and that’s the motorcyclist."

Click here for more of the world's best and worst police cars.