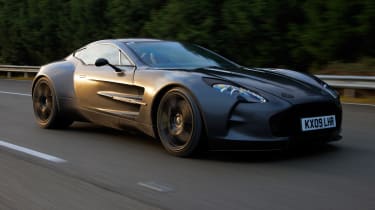 The Aston Martin One-77 is the ultimate Aston. It's a limited run supercar for the super rich - its name comes from the fact it costs one million pounds and only 77 have been built. Unmistakably Aston, this is more than just a tarted up DB9 – the muscular front end sweeps backwards into bulging wheelarches and a wide rear track. Under the carbon fibre skin is exclusive motorsport-inspired technology, such as pushrod suspension and a sharp-shifting paddleshift gearbox. The price alone means it has very few direct competitors, aside from the insane Bugatti Veyron, and given the One-77’s exclusivity, this British supercar should go down in history as one of the marque’s truly special creations.

Given the price, you’d expect the Aston Martin One-77 to have Bugatti Veyron challenging pace. Well, the Aston is immensely fast, but it takes a whole second longer than the Bugatti to do 0-62mph – completing the sprint in 3.5 seconds. The top speed exceeds the 200mph barrier, but is a long way short of the Veyron’s 252mph maximum. All things considered, the One-77 is still an impressive machine, and the 7.3-litre V12 is the most powerful, normally aspirated engine in the world. It also has Aston’s most sophisticated underpinnings yet, which means the One-77 is entertaining when the roads get twisty. Add this to adjustable dampers and ceramic brakes, and there isn’t a lot that will keep up with the mightiest Aston of all.

Details on the One-77’s economy and emissions are pretty scarce, but we don’t imagine the 750bhp V12 to be particularly frugal. However, if you’ve got the cash to buy a £1million supercar, then the number of miles it will do to the gallon probably isn’t a concern. The same goes for servicing and maintenance – costs are going to be simply eye watering, but then if you own a One-77 you can probably afford it.

There is no denying the Aston Martin One-77 has taken styling cues from the firm's textbook. The front end looks like an open-mouthed Vantage and the rear is very DBS. The long, sloping bonnet is sleek but imposing and the low roofline gives it a true supercar stance. But comparing the million pound machine to its less expensive siblings is no bad thing – the British manufacturer makes some of the most beautiful cars on the road. Inside is a similar story; the One-77 defines luxury with expensive leather, carbon fibre and polished aluminium plastered all over the dash. It's safe to say that if you own a One-77 then you’re in possession of one of the most desirable cars in the world.

The One-77's cabin will carry two adults in ultimate luxury, but in terms of versatility, owners can expect little else. The doors are coated in carbon fibre, and even the interior handles have been replaced with a piece of leather – all in pursuit of saving weight. If you want to cross the continent with anything more than a plastic bag, you’d be better off with a DBS.

Unlike the four-wheel-drive Veyron, the Aston sends all of its power to the rear wheels. However, with the help of adjustable dampers and ceramic brakes, the One-77 should feel just as sure-footed behind the wheel. Modern-day Aston Martins are vastly improved for reliability compared to their predecessors, and the hand-built One-77 shouldn't be any different. 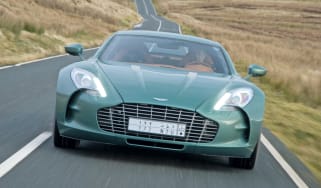 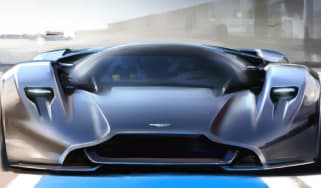 Aston Martin has unveiled it’s digital racer, the DP-100, at the Goodwood Festival of Speed
Aston Martin One-77 driven 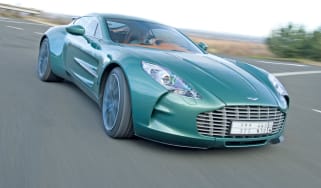 We get behind the wheel of the stunning and ultra-rare £1.1m Aston Martin One-77 for the first time
Skip to HeaderSkip to Content