We get behind the wheel of the stunning and ultra-rare £1.1m Aston Martin One-77 for the first time 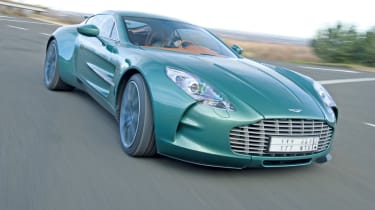 We've waited a long time to get behind the wheel of the Aston Martin One-77, but it’s every bit as special as we’d hoped. Admittedly, low-speed manoeuvres are made a little difficult by the jittery semi-race clutch, yet the car really shines at speed. It’s far from easy to drive, spinning the rear wheels up at the lightest brush of the throttle, but trying to master this Aston is something you’ll want to do again and again.

Aston Martin planned the One-77 to be its ultimate car, bespoke to each customer, with only 77 made and a price tag of more than £1million. Once they were all sold, there were to be no more produced and there were to be absolutely no press drives.

But getting hold of a customer car is a different story, and it’s thanks to the kindness of a very lucky One-77 owner that we’ve managed to take the wheel of the ultimate Aston creation.

As soon as we laid eyes on the One-77, we were blown away by its outlandishly curvaceous aluminium body. It’s recognisable as an Aston, but has beautiful details such as the aggressive creases on the doors, looping tail-lights and huge rear diffuser. Pull open the lightweight door and you’re presented with bare carbon-fibre on the sills, door panels, floor and even on the bulkhead behind the seats.

More reviews for One-77 Coupe

Almost every other surface is trimmed in leather, with black anodised aluminium and a glinting hoop of rose gold on the centre console completing this very special interior.

You start the One-77 in the same way you’d start any other Aston: by slotting the crystal key straight into the centre console. That wakes the One-77’s 7.3-litre V12 engine, which has 750bhp and a nicely symmetrical 750Nm of torque. Revs flare up as soon as you brush the throttle, with a racier engine note than any other Aston. Pulling away, the semi-race clutch struggles to work smoothly, but once up to speed, it fires up and down the gears as quickly as you’d want.

With all that power going to the rear wheels, the One-77 is absolutely vicious – able to spin up its wheels at motorway speeds if you floor the throttle. Its figures speak for themselves: 0-62mph takes less than 3.7 seconds and top speed is more than 220mph. But fuel economy isn’t so special – we could only average 6.2mpg over 500 miles of driving.

Wet and twisty Welsh roads reveal the One-77’s true character. It feels like a mix of racing drivetrain and suspension, but with some luxurious touches.

It’s extremely rewarding and incredibly addictive to drive. But the One-77 is not an easy car to get the most out of. Unlike the Bugatti Veyron, it doesn’t just deliver blistering performance on a plate, regardless of driver skill.

Instead, it’s a beautiful, vicious, hi-tech supercar you never want to stop driving. So it’s a shame we won’t get the chance to experience it again. You can, though, in a 16-page special in our sister magazine evo this month.