Pictures and details of the new flagship Aston Martin Vanquish Volante, which is set to rival the Bentley GTC Speed 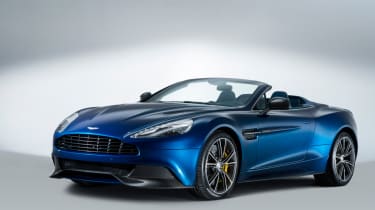 Just weeks after it lifted the lid on the dramatic open-top CC100 concept, Aston Martin has revealed another jaw-dropping convertible. This time, it’s the all-new Vanquish Volante.

The drop-top version of the V12 flagship features the same sculpted carbon-fibre bodywork and thunderous 565bhp 6.0-litre engine as the coupe, meaning a 0-62mph time of 4.2 seconds.

That’s just a tenth slower than the hard-top, despite the Volante tipping the scales at 1,844kg – 105kg more than the two-door. It’s also capable of reaching an identical 183mph top speed.

Aston claims the newcomer is the stiffest soft-top it has ever produced, but because it uses a six-speed TF automatic gearbox rather than a manual, the Vanquish Volante is actually 34kg heavier than the DBS Volante it replaces.

Finished in striking Ocellus Teal blue paint, it looks amazing, and it features the same exposed carbon splitter and rear diffuser as the standard car, while the roof mechanism is compact enough to fold away in front of the fixed rear spoiler.

The triple-layer fabric hood takes 14 seconds to open and, for the first time, the windscreen is the same height as the coupe’s. That should improve headroom, and means it mirrors the profile of the coupe more closely.

As you’d expect, the springs and dampers have been tweaked to cope with the extra weight, and tuned to give a slightly softer ride. Three-stage adaptive dampers are standard, with normal, sport and track modes that also tailor the ESP and throttle mapping.

Inside, the Vanquish Volante is suitably plush, with quilted leather seats (which come in a range of colours) and the same glass buttons as the coupe.

Boot space is significantly improved over the DBS Volante – the new car’s 279-litre load area is twice as big. Combined with a 2+2 layout, the Vanquish should be more practical than its main rival, the Bentley GTC Speed.

The new Aston commands a higher price than the Bentley, too, with the Volante starting at £199,995. It’s available to order now, with first deliveries due later this year, and it’s tipped to make its public debut at the Pebble Beach Concours d’Elegance in California on 18 August.