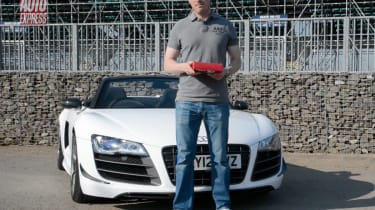 This GT model weighs 85kg less than the standard V10 Spyder and is powered by a tuned version of the same mid-mounted 5.2-litre V10. It now produces an extra 35bhp, bringing the total power up to 553bhp.

This means that the R8 GT Spyder can go from 0-62mph in 3.8 seconds and has  a top speed of 197mph. Watch Mat Watson's video review, then read the first drive report here.