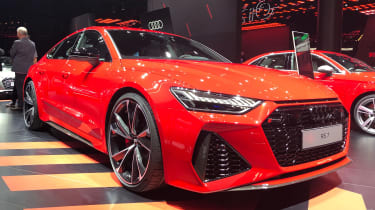 The new Audi RS 7 Sportback is on sale now priced from £97,050. It joins the RS 6 Avant in the German brand’s range of powerful executive vehicles, featuring a new wider body and a 4.0-litre twin-turbo V8 petrol engine with a mild-hybrid system.

Just like the previous RS 7, the new car takes the basic five-door A7 Sportback and adds some extra aggression in both styling and firepower courtesy of the German brand’s high-performance and racing division, Audi Sport.

Buyers have their choice of four trim-levels, including a base-model and three further specifications, called Carbon Black, Vorsprung and Launch Edition. As standard, buyers get a set of 21-inch alloy wheels, Matrix LED headlights, privacy glass and aluminium mirror housings and exterior trim. 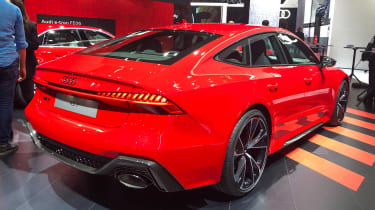 Under the bonnet the RS 7 uses the same engine fitted to the RS 6 – a new 4.0-litre, twin-turbo V8. It packs 592bhp and maximum torque stands at 800Nm between 2,100 to 4,500rpm, with power fed through an eight-speed tiptronic gearbox and Audi’s quattro all-wheel drive system. 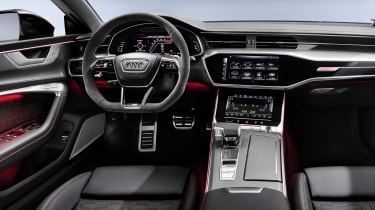 The new V8 features cylinder-on-demand technology. In a high gear cylinders 2, 3, 5 and 8 are shut down resulting in the car running in four-cylinder mode to improve fuel consumption. As standard the RS 7 is limited to 155mph but if the ‘Dynamic Package’ option box is ticked, Audi will raise the top speed to 174mph and to 189mph if the ‘Dynamic Package Plus’ is selected.

There’s also a new mild-hybrid set-up; a 48-volt electrical system is mated to a belt alternator starter and a lithium-ion battery and, depending on which driving mode is selected, the car will either coast or recover energy.

Visually, only the bonnet, roof, front doors and the tailgate are carried over from the standard model. The front is 40mm wider than a standard A7 and there’s a bespoke RS grille with a 3D honeycomb design and large air vents either side. LED headlights and rear lights are standard but, to differentiate them from the regular car’s, they have a different sequence when the car is locked and unlocked. 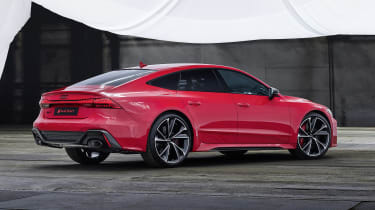 Inside, Audi has fitted a pair of leather sports seats, a flat-bottomed steering wheel and buyers get the choice of two design packages to add some colour. Two new driving modes, called RS1 and RS2, appear for the first time and allow the drivers to create two configurable modes that can be accessed at the touch of a button.

In contrast to the previous RS 7, the new car can be optioned with a three-seat rear-bench seat but a two-seater layout is standard. There are also unique RS displays for the Virtual Cockpit and infotainment screens, and new Audi Sport puddle lamps too.

Click here to take a closer look at the new Audi RS 6 Avant...