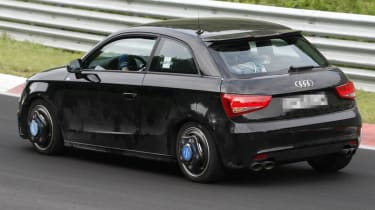 These are the spy shots that prove the wild 252bhp Aud A1 quattro was just the beginning - another hot four-wheel drive Audi A1, badged the S1, is on the way. Spotted high-speed testing at the Nurburgring in Germany, this prototype gives away its identity via the four exhaust pipes poking out at the rear, unlike the limited-run A1 quattro which made do with just two.

Developing a four-wheel drive system for the A1 quattro was an expensive process for Audi, so it was always likely that further four-wheel drive A1s would emerge - hence the arrival of the S1. Power will come from the same 2.0 TFSI turbocharged engine as the A1 quattro, but detuned to around 220bhp - making this more affordable than the already-sold-out £40,000 A1 quattro.

The strage contraptions you can see strapped to the four corners are sensors designed to measure various speed and suspension parameters at each wheel. Expect the production car to feature optional 18-inch wheels, silver wing mirrors and a more aggressive bodykit.

Bigger brakes, firmer suspension settings and a four-wheel drive system - that under normal conditions sends power to the front wheels, but if they lose traction, can send up to 100 per cent of engine power to the rear - should ensure the S1 is hugely capable on the road.