Bentley has revealed a special edition version of its V8 SUV, intended to inject a bit of sporting intent into the Bentayga 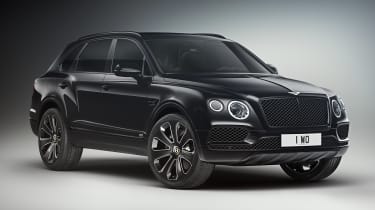 Bentley has unveiled a special edition variant of the Bentayga V8. Called the Design Series, it adds a reworked, customisable interior and a range of exterior updates. Naturally, prices haven’t been announced, but we’re expecting it’ll be a few thousand pounds north of the standard car’s £136,200 price-tag.

The most noticeable changes are found in the cabin. The Bentayga V8 Design Series gets a fresh fascia finished in a brand new carbon fibre weave, specifically developed for the model. A diamond-studded Breitling clock and illuminated tread plates are equipped. It also receives reupholstered seats, trimmed in black leather, with a choice of four accent colours.

Bentley’s exterior revisions are more subtle, with the firm’s ‘Blackline’ package included as standard. This adds a body-coloured front apron, twin gloss black exhaust tips, an enamel “Design Series” badge and black replacements for every piece of brightware. It also gets a fresh set of seven-spoke alloys, with new Mulliner self-levelling wheel badges.

Like the standard entry-level Bentayga, the Design Series is powered by Bentley’s 4.0-litre twin-turbocharged V8, producing 545bhp and 770Nm of torque. Bentley claims identical performance figures, with a 0–62mph sprint of 4.5 seconds and a top speed of 180mph. It should be as thirsty on fuel, too, with claimed figures of 21.7mpg.

What do you think of the Design Series Bentayga? Let us know in the comments below…