Bentley Bentayga swoops in with falconry makeover by Mulliner 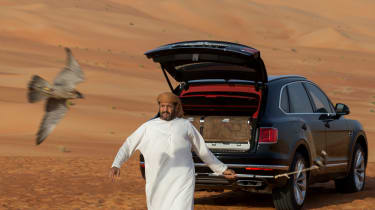 Bentley has added another feather to the Bentayga's cap with the help of Mulliner – the firm’s bespoke, personal commissioning division.

This latest modified Bentayga is what the firm calls “the ultimate accessory for the falconry enthusiast”, and it features a series of bespoke installations in the boot, designed to house all the equipment a Bentley owner with a falcon could possibly need. To give it its full name, the car is known as the Bentley Bentayga Falconry by Mulliner. 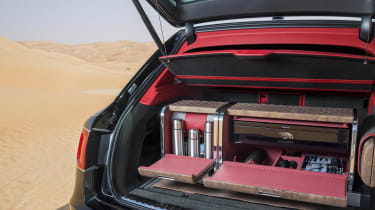 The vehicle really does have everything the keen falconry fan will have been preying for when enjoying a nice afternoon out with their big birds. In the back, you’ll find two new storage units, trimmed with natural cork fabric. One of them is a drinks cabinet, but the other is a ‘master flight station’ for keeping falconry equipment. Both of these units sit on a sliding tray.

Open up the master flight station, and inside is drawer finished with a shiny, piano black veneer and a falcon crest. In here, some the bespoke equipment the Bentayga Falconry by Mulliner comes with is kept. There’s also storage for a GPS bird tracking unit, binoculars, plus hand crafted leather bird hoods and gauntlets, though these are optional extras. 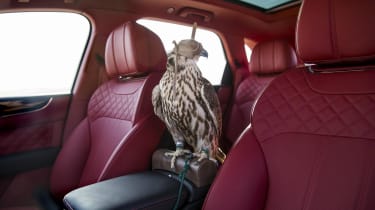 Two perches are stored in a bespoke cork-trimmed case which slots into a hard pocket in the side of the boot. As for the refreshment cabinet, it comes with three metal flasks and cups, plus a blanket and face cloths.

The Bentayga Falconry gets some tweaks in the cabin too. There’s a removable perch and tether on the central armrest, while a bespoke veneer depicting a falcon flying over a desert scene finds its way onto the dashboard – it makes use of 430 individual pieces of wood and takes nine days to craft. 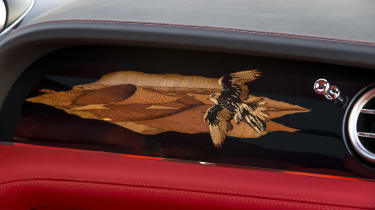 It’s not the first time Bentley has used Mulliner to woo outdoor types with the Bentayga – last year, the firm revealed a similarly fettled version of its SUV with keen anglers in mind, with the Bentayga Fly Fishing by Mulliner.

Fly fishing, now falconry. Which outdoor activity will Bentley turn the Bentayga towards next? Have a guess in the comments!