We round up the finest company cars across five price bands, with a bumper crop of EVs, to help business users choose 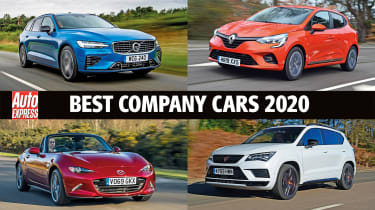 This week marks the start of a new tax year, which is an important time if you’re a company car driver. It’s doubly important for the 2020/2021 tax year given that the Benefit-in-Kind (BiK) company car tax regulations have had a massive shake-up. So we’re bringing you our best picks from five price brackets, plus the lowdown on how this year’s financial regulations for company cars massively benefit electric vehicles.

BiK tax rates are still calculated from a car’s CO2 emissions, but for cars registered on or after 6 April 2020, they use figures from the more stringent WLTP testing regime, rather than the old NEDC system. The basic upshot of this is that for many pure petrol and diesel cars, official emissions are now higher, so business users will pay more.

Along with EVs, plug-in hybrids (PHEVs) benefit hugely from these rule changes. BiK rates for plug-ins are based on a sliding scale that depends on how many miles any given PHEV can cover in electric-only mode, assuming they emit between 1 and 50g/km CO2.

These rates can range from 0 per cent if the car can cover more than 130 miles on a full charge (none fall into this category so far), to 12 per cent if the car offers less than 30 miles of zero-emission range. Pure diesel and petrol power still makes sense in many cases, but there are more hybrid and electric choices than ever in our rundown this year, which shows how the company car tax system is catching up with – and reflecting a change in – the industry.

What is BiK and what will it cost me?

Your company car is classed as a fringe benefit by the Government, so it incurs Benefit-in-Kind (BiK) taxation. What you pay is based on a percentage of the car’s P11D value, which is its price including options, plus VAT and delivery charges, but not its registration fee or road tax.

This percentage value is determined by its CO2 emissions. Depending on whether you pay income tax at the lower or higher rate, the annual BiK bill is then calculated at either 20 or 40 per cent of the resultant figure. But as with many things in life, people often pay per month, so we’ve divided this by 12 to show your monthly company car tax bill. As you’ll see from our figures, the new rules mean plug-ins and EVs massively benefit from the new taxation system.