Got £3k to spend on a used car? There are tonnes of tempting options. We’ve located seven of the best... 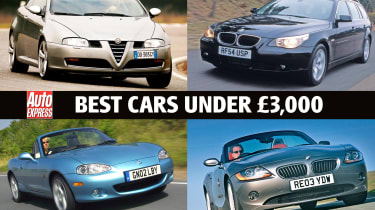 We discovered every single one of the following cars on sale for £3,000 or less, covering everything from hot hatches to everyday family cars. Proof, if any were needed, that cheaper options are out there for those willing to delve into the classifieds.

It goes without saying that an inspection and a test drive – especially at that kind of age – is a must, otherwise you are entering somewhat of a lottery as to how well a vehicle has been maintained. Generally though, the cleaner the service history, the better shape a car will be in. 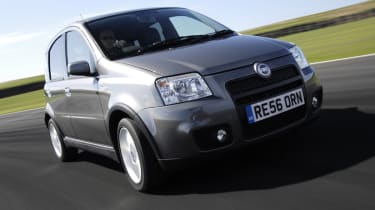 The Fiat Panda 100HP has been a motoring hero since it was launched in 2004, and now you can pick one up for around £2,000, it’s got to be one of the best-value hot hatchbacks on the used market.

While 99bhp doesn’t sound like a lot, a kerbweight of 975kg means the Panda is quick enough. But it’s not about outright speed; this Fiat’s focus is on fun. You can rev the lively 1.4-litre petrol engine to the limit without risking your licence, using the six-speed manual box and enjoying the sporty engine note.

Then once you reach a corner you can maintain momentum easily because there’s lots of grip and not much body roll. Yet if you want to lift off and get the chassis moving about, you can indulge even at low speed. This sense of fun runs deep in the Fiat, and not much can touch it for value. The Panda 100HP is also a brilliant city car, with space for four and a decent boot, too. 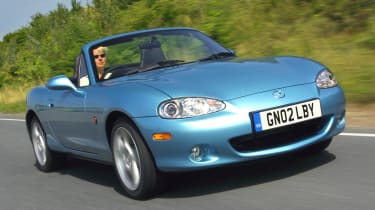 It’s easy to argue that the Mazda MX-5 is the best sports car ever made. It’s certainly the best selling, with around one million having found homes over the past 30 years. Also, it’s really affordable used, delivering open-top fun, exciting handling and plenty of style for not much cash.

In 1.8-litre form the MX-5 is fast enough; although this car has only 144bhp, it’s very light. A late Mk2 looks the best value at the moment, since the Mk3 gained weight. 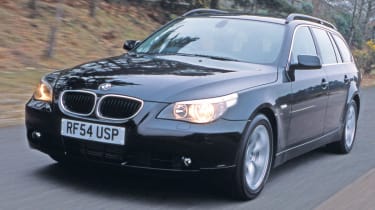 Premium German brands often lose a lot of value quite early in their life, which is why at this price point you can grab bargains like this smooth straight-six BMW 5 Series Touring.

There’s loads of space in the boot and room for the family, too, but the 525i is also great to drive and comfortable on the motorway. Running costs might be steep, but there’s plenty in the budget to cover this, which makes this premium wagon an absolute steal. 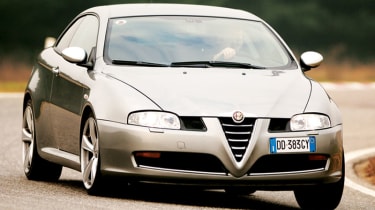 Most makers have produced one or two stylish cars in their times, but is any more consistent in its design than Alfa Romeo? All of the Italians’ models look great, and many now carry bargain price tags. But that’s also because they’re not exactly known for their reliability.

If you buy with your head and choose an example that’s been cared for, then you can find a beautiful and good-to-drive sporty car that won’t cost too much to run. In this case, we’ve gone for a late-2000s GT with diesel power, so fuel economy should be strong, too. 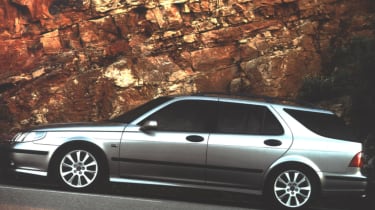 Some manufacturers that no longer exist are hardly missed, but that’s not the case with Saab. The brand ploughed its own furrow and paid the price for heavy investment in its vehicles; this was great for customers but evidently not for the company’s bottom line.

The upshot is that you can now buy an appealing piece of design and engineering, a 9-5 Aero, for £2k. The 2.3-litre turbo petrol model serves up 256bhp and 350Nm of torque, plus the 9-5 is fairly luxurious and comfortable. It’s also ultra-exclusive these days. 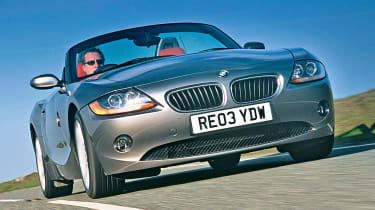 The ‘flame surface’ design of the original E85-generation Z4 divided opinion back in 2003, but it still looks fresh today. While four-cylinder models are fine, we’d go for a six-cylinder if you can stretch your budget by around £1,000. You can also enhance the aural excitement in just 10 seconds, thanks to the electric-folding hood.

The first generation Z4 rivalled the Porsche Boxster and Honda S2000, but both of those cars are significantly more money now, it's more than likely the Z4 won’t depreciate much further. 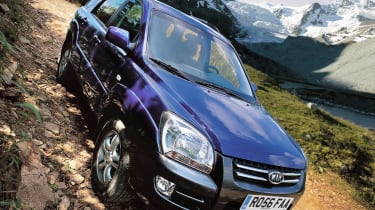 These days the Kia Sportage is a genuinely fashionable SUV, but that wasn’t always the case. What you do get if you opt for this boxier second-generation model, though, is a sturdy and spacious car. It has a useful opening glass hatch on the tailgate and a flat floor across the rear that makes it possible to carry three passengers in comfort.

A Sportage is a good option for those who plan to venture off road, too, because of its four-wheel-drive system and raised ride height.

What if you had a bit more money to play with? The why not check out the best cars for under £10,000.