The sleek BMW X8 SUV looks set to feature plug-in and M models, and our exclusive images preview how it could look 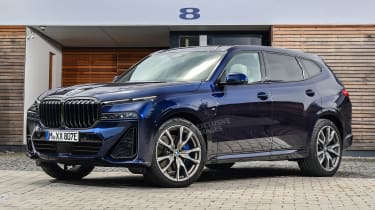 BMW will add another member to its SUV line-up next year with the arrival of the X8, a more style-driven counterpart to the full-size X7. As with that model, it will challenge cars such as the Mercedes GLS, Audi Q8 and Range Rover.

BMW has owned the X8 trademark for a number of years, and the car’s launch will see the company’s range of X-badged SUVs expand to 10 models in total.

Under the skin, the BMW X8 shares its running gear with the X7. In common with other even-numbered BMW SUVs, such as the X4 and X6, the flagship X8 will be a coupe-inspired model, but aimed primarily at markets such as China and the US.

As our spy shots and exclusive images reveal, it will be more rakish than the X7, but the X8 won’t go down the full coupe-SUV route. It will retain an upright profile, but there will be a number of design changes in the surfacing of the bodywork. It will be similar in concept to the Audi Q8, which uses the same running gear and nose as the Q7, but has its own design from the A-pillars back. 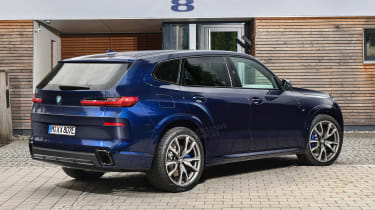 The X8’s upright front end will feature the X7’s huge kidney grilles, but they will be flanked by split-level LED headlights – a design theme that will be seen on other new and next-generation range-topping BMWs, such as the soon-to-be-facelifted X7 and the new 7 Series limousine, due in 2022.

Elsewhere, the tough-looking and imposing design of the X7 will give way slightly to sportier sweeps and touches. At the rear there are far more pronounced wheelarch lines, and a back bumper that’s home to two oversized exhausts.

We haven’t caught sight of the X8’s interior, but it’s likely to be less of a departure than the exterior and use the same advanced design and technology as the X7. Dual 12.3-inch displays up front will appear with BMW’s latest iDrive infotainment system. With BMW resisting the urge to make the X8 a true coupé-SUV, the more upright rear end could still be home to a third row of seats, making it a sportier, but slightly less spacious alternative to the X7. 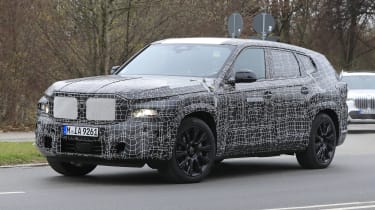 The X8’s focus as a sportier alternative to the X7 is hinted at by further trademark activity. Although BMW’s M division hasn’t touched the X7, a filing for an X8 M has been spotted among other BMW applications. Such a model would more than likely use the 4.4-litre twin-turbo V8 fitted in the BMW X5 M Competition. In that car it develops 616bhp, which can propel the X5 M from 0-62mph in 3.8 seconds. Similar power and performance would see the X8 M compete with models such as the Porsche Cayenne Coupe Turbo.

Plug-in hybrid power has yet to appear in the X7, but our spy shots suggest that the X8 could introduce an electrified powertrain to the top end of BMW’s SUV line-up. Test mules have been spied wearing ‘hybrid test vehicle’ stickers.

It’s likely that the hybrid X8 will also turn to the X5 for its plug-in technology, this time from the xDrive45e. That model’s turbocharged 3.0-litre straight-six, electric motor and 24kWh lithium-ion battery are good for 394bhp and a maximum electric range of 50 miles, although the heavier X8 will likely offer shorter EV running.

Does BMW need another SUV in its line-up? Let us know your thoughts in the comments section…