The M3’s claimed efficiency is much improved, although you’ll be lucky to come close if you regularly use even a fraction of the car's performance

Manufacturers are turning to turbos to increase their cars' power at the same time as minimising their environmental impact – and making them cheaper to run, too. BMW chose this route with the M3, and this model delivers a best of 34.0mpg combined with 194g/km CO2 (33.2mpg and 198g/km in the CS). These figures are under the old NEDC test cycle, which will be the only test the M3 will be tested under, as the next M3 will get the WLTP test treatment. In the real world, when we tested the standard M3, we only managed 21.1mpg, which is some way off the official claims, although this did include some track driving.

Go for the manual model and that economy will probably be slightly worse, as its official economy figure is lower than the DCT model's. At the same time, its CO2 emissions are higher, too, which will mean higher tax liabilities for company car drivers.

A 60-litre fuel tank means the M3's cruising range is up on its predecessor's and on a par with that of its main rival, the Mercedes-AMG C 63. The large tank might mean it’ll be costly to fill, especially if you use the preferred super unleaded, but it’s less frustrating than having to stop every few hundred miles to top it up with fuel again – especially when the five-seat cabin delivers lots of space and comfort, making it perfect for long journeys. 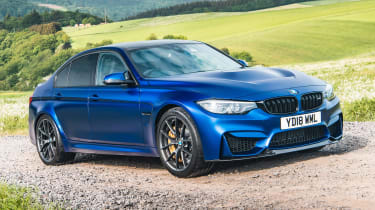 Although emissions are lower than in the old V8-engined model thanks to that turbo system, this is still a high-performance saloon, so it won’t be breaking any eco records. Combined with the relatively high purchase price, it means company car drivers taxed at the higher rate will pay well over £8,000 in Benefit in Kind tax.

The stop-start system helps to cut emissions, but it’s the only nod to helping improve fuel consumption. The M3’s aggressive body design is more focused on helping cool the huge engine and brakes than make the car effortlessly slip through the air and reduce drag.

At group 45 for the M3 DCT, the BMW is near the top of the tree when it comes to insurance. However, it’s still less than some other high-performance cars like the more expensive Lexus RC F, which is rated at group 48.

As a result, it’ll cost our sample driver (42-year-old living in Banbury, with three penalty points) around £530 to insure per year. Both the manual and automatic are rated in the same group, so specifying the DCT transmission shouldn’t add anything extra to your premium.

The manual car clearly holds more appeal to the driving enthusiasts who are likely to buy an M3 second-hand, so it hold its value better over three years, retaining around 52 per cent of its purchase price. The DCT auto is only just behind, though, with a residual value of around 50 per cent. The Competition Pack models retain slightly more value, reflecting their improved performance and handling. 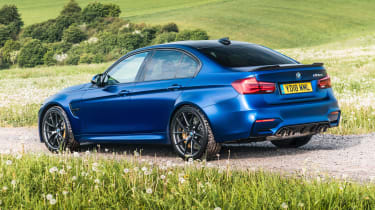 The M3 CS is around £22,000 more expensive than the M3 with a dual-clutch gearbox and the Competition Pack, but its limited-run status is likely to boost residuals in years to come, although unlikely to the extent of the limited-run M4 GTS.