With a big boot, five seats, good comfort and respectable fuel economy for the performance, the M3 is a surprisingly practical family car

Even in the Comfort setting, the suspension feels firm, but not to the extent that it jars too much on bumpy roads. Be wary of the two stiffer settings, though, as they mean the M3 really thumps over bumps; and, if you try applying full throttle on bad tarmac, the traction control will curtail any acceleration. The softer setting means you can make better progress as it lets the car flow with the road.

With four doors, five seats and a 480-litre boot, the M3 can take just about anything the average family can throw at it. Plus, it has the ability to travel at incredible speeds round a race track when you want to explore the car’s performance on your own and in safe conditions. 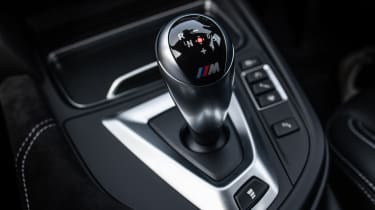 Despite the M3 having more aggressive styling than the regular 3 Series it's based on, visibility is just as good as it is in the standard car. So, with parking sensors and a reversing camera available, manoeuvring the relatively compact 3 Series is simple.

The sports seats give a great driving position, so you can get nice and low in the car to feel what it’s doing underneath you. The big, leather chairs are supportive, too, so if you’re going to be cruising for miles, you’ll have no worries about a bad back when you reach your destination.

The advantages of being based on a standard BMW 3 Series body are also easy to see when it comes to storage. A large glovebox, big door bins, two cupholders and plenty of trinket trays ensure your change and gadgets, such as mobile phones, won’t go flying around the cabin the first time you turn into a corner.

Fundamentally, the M3 provides a great balance between performance and practicality, continuing the trend that BMW has established with its sporty executive saloons.

The M3’s closest rivals are the Mercedes-AMG C 63 and Alfa Romeo Giulia Quadrifoglio, as they are the only performance execs available with a saloon body style. The Audi RS 4 and RS 5 come in estate and coupe form only.

At 1.88m, the M3 is a little wider than the 1.81m Mercedes. However, at 4.69m the C63 is marginally longer than the 4.63m BMW. These differences are only small, though, so in day-to-day driving and other manoeuvres, you’ll be hard pushed to tell the difference in size between the two cars. 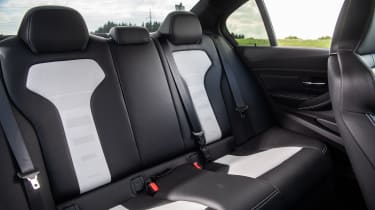 Thanks to the two cars having a similar wheelbase, there’s roughly the same amount of rear legroom inside, too. However, there’s more headroom in the C63.

A decent amount of leg and headroom in the rear means there’s plenty of space for four. Being rear-wheel drive, the M3 has a big transmission tunnel in the floor, whichm combined with the larger sports seats up front, means things might get a little more cramped if you’re carrying three rear passengers – although it’s still fine for short to medium journeys. Isofix points help if you’re installing a child seat in the rear.

In contrast to the two-door M4 Coupe, access to the rear of the four-door M3 is much easier.

With a large 480-litre boot and a relatively shallow loading lip, the M3 is just as practical as any other 3 Series saloon. There are points to help secure loads and you can even get a luggage net to stop bags rolling around in the boot.

Being a saloon, the opening isn’t as big as on a hatchback, but the aperture is still a good size and the boot isn't hard to pack.