Is the BMW X5 M50d worthy of the company's M badge? 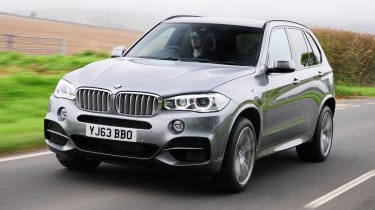 THE M50d’s quick powertrain is wrapped in a practical body. Yet while that’ll appeal to some, it doesn’t have the sharp drive to match its engine thanks to its odd steering, plus weight and size. It’s well kitted out and at its best as a cruiser – if you don’t go for adaptive dampers. Ditch them and you can opt for the third row of seats; but then you may as well buy the £49,985 xDrive30d M Sport.

Right now, the BMW X5 M50d is the only M Performance model in the new BMW X5 line-up. It combines the butch bodykit of the popular M Sport spec you can choose on lesser versions with pace approaching that of the forthcoming range-topping X5 M.

While it’s not a fully fledged product of BMW’s M Division, the mighty triple-turbo 3.0-litre diesel is certainly worthy of the badge.  It develops 740Nm of torque between 2,000-3,000rpm, which makes it extremely flexible – so much so, third gear is all you’ll need on a twisting B-road.

But what you don’t expect is that the maximum 375bhp, which arrives at 4,000rpm, encourages you to explore the higher reaches of the engine, just like a petrol car. This is backed up by a very nicely engineered gurgle that’s somewhere between V8 petrol and large-capacity diesel.

The standard eight-speed auto is extremely smooth, slicing through the ratios on its own, or responding quickly to plastic paddles on the rear of the steering wheel’s spokes. You can’t fault the grip from the four-wheel-drive system and very wide Dunlops fitted to our test car’s optional 20-inch alloys, either.

However, while the powertrain is every bit as impressive as you want from a car with an M badge, despite being a diesel, the M50d doesn’t deliver a sporting drive to match. In the most aggressive Sport+ mode, the steering is overly heavy when you turn into a corner, and then is over-eager to self-centre again on the way out. It feels very artificial and you must make constant tweaks through corners, as if the car’s computers can’t keep up with controlling its mass.

The X5 never has physics on its side. At 2,265kg the M50d is the heaviest car in the range, and even though the optional Adaptive Dynamic suspension (£2,495) keeps the car flat and stable in bends, the big SUV’s response to steering inputs and the torture it dishes out to the brakes don’t encourage you to drive hard. It’s strange, then, to report that the best way to drive this M-badged car is in its Comfort setting. That gives a more forgiving ride, too, and lighter steering that responds more faithfully to your inputs. When you’re cruising the engine quietens, and you won’t be fussed by wind or road noise.

This also leaves you to enjoy the fact that while the cabin’s design is fussy, it’s much plusher and more spacious than the outgoing model’s. BMW’s latest iDrive sets the standard for in-car infotainment and ease of use, too.

Finally, it allows you to ponder the fact that while the M50d can’t match the drive of the Porsche Cayenne Diesel S, it’s more practical and better equipped. Finally, it might not quite have the designer looks of the Range Rover Sport SDV6, but it’s nearly as quick as the pricier 5.0-litre supercharged petrol V8 Brit.