The new all-electric Byton M-Byte SUV will be sold in right-hand drive in the UK, CEO confirms

The Byton M-Byte will be made in right-hand drive and go on sale in the UK by the end of 2021, the company co-founder and CEO has confirmed to Auto Express.

Revealed in production form at the Frankfurt Motor Show, the M-Byte is a 4.9-metre-long pure-electric SUV, with a range of up to 286 miles. Its standout feature is a spectacular 48-inch curved OLED 4k display which runs right across the width of the dashboard - and is controlled via two additional screens, one of them mounted on a fixed steering wheel hub.

The car will be built at an all-new factory in Nanjing, China, and the facility has the capacity for up to 300,000 vehicles per year. The first deliveries of the M-Byte will be to Chinese customers by next summer, but the company’s co-founder and CEO Daniel Kirchert told Auto Express, “We think there’s big potential for us and the M-Byte in the UK. So yes, absolutely, we will make it in right-hand drive and sell it there. It might not be at exactly the same time as the rest of Europe, but I’m confident we can make 2021.” 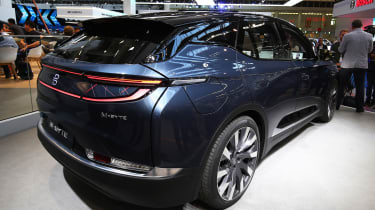 Kirchert said the controversially large display will be a “signature” of Byton, and that it will feature on the company’s next two vehicles: a saloon, likely to be called K-Byte, and a seven-seat SUV. “The sedan will follow quickly,” Kirchert said, “and in our office in Munich they’re already in the final stages of designing it.

“Some people have said the screen could be distracting but we’ve been driving the car a lot and that’s simply not an issue,” he added. “In most car UIs the screen is in the middle and quite close, because it often has a touchscreen interface, so your eyes have to adjust a lot and you have to look at the centre of the dash. Our display is really quite far away, because it’s controlled by the other screens, including one in the middle of the steering wheel. So it’s actually quite convenient for the eyes to adjust - and with something like a big map, big navigation instructions, you actually feel more at ease.”

Byton’s Chief Technical Officer, David Twohig, said the company is targeting comfort and refinement instead of chasing after performance EVs. The car will feature conventional steel springs and dampers, and it will not be offered with air suspension. “We’re not trying to chase some ultimate handling target but what I do want is a class-leading ride and comfort,” Twohig told us. “If you want to set lap records on the Nordschleife, pick another car. So many cars have this horrible body movement and jiggling, and that’s bad secondary ride. We’re working very hard to eliminate that because that’s annoying and tiring over time.”

The M-Byte will cost from around €45,000 in Europe, but no specs or prices have been revealed for UK editions.