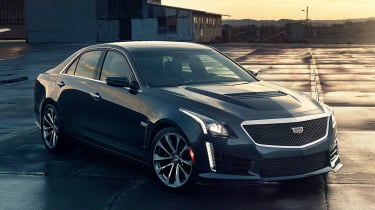 The most powerful Cadillac in history, called the Cadillac CTS-V, will go on sale in Europe in 2016, after its launch in the US next summer.

Boasting 631bhp from its 6.2-litre V8 petrol engine, the Cadillac CTS-V will be capable of 0-60mph in just 3.7 seconds. That means it should be faster in a straight line than the BMW M5, which does 0-62mph (100kmh) in 4.3 seconds. Cadillac says the CTS-V will hit 199mph – considerably more than the BMW’s electronically limited 155mph.

Cadillac says the new transmission offers full manual control via steering wheel paddles – to deliver shift performance that rivals the dual-clutch/semi-automatic transmissions – but with the smoothness and refinement of a conventional automatic. 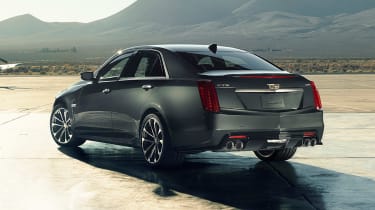 The CTS-V also uses a lighter and more compact supercharger than before. It works in harmony with cylinder deactivation technology to improve fuel consumption and lower emissions. Exact figures will be announced closer to launch, but even with this tech we don’t expect much more than 25mpg from the powerful V8 engine.

The car boasts Brembo brakes, magnetic ride control, Michelin Pilot Super Sport tyres and Recaro racing seats. Structural stiffness has been increased by 25 per cent over the standard CTS, and there’s an electronic limited-slip differential, too. 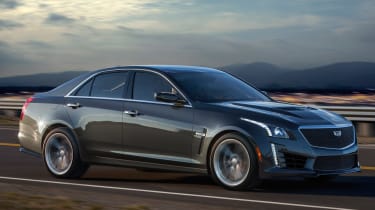 In terms of design, the super-quick Cadillac gets a lightweight carbon fibre bonnet, which not only extracts hot air out of the engine, but helps reduce lift at speed by channelling air over the top of the car. A new grille allows more air into the engine, while a front splitter boosts handling by increasing high-speed downforce.

The track-honed design, chassis and suspension are said to elevate the CTS-V’s performance and driver control to new levels. Cadillac claims the tweaks enable track driving without modification thanks to the long list of high-performance standard kit.

While the CTS-V shares its wheelbase with the standard CTS, it gains a wider front and rear track for improved handling, grip and stability. All CTS-V models get 19-inch alloy wheels, which themselves are 45 per cent stiffer than standard. 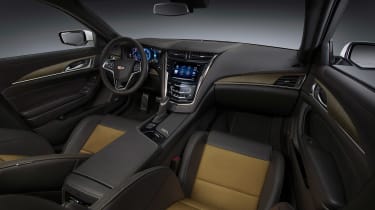 Inside, the CTS-V features a unique 12.3-inch screen and head-up display. It also gets Bluetooth connectivity, a Bose stereo and wireless inductive phone charging.

Prices will be announced next year, after the car’s US launch in the summer. However, with the BMW M5 currently retailing at more than £73,000, don’t expect the CTS-V to come cheap.