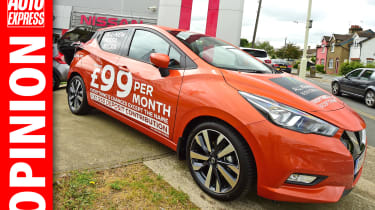 Suffering from Brexit fatigue yet? I don’t blame you. Negotiations for our departure from the European Union have barely started and I suspect a degree of indifference is already setting in for many of us. That’s entirely understandable, but the reality is what’s agreed could have major implications on what you pay for your next car.

I’ve had a number of discussions recently with industry insiders who are now genuinely fearful that Brexit could do some damage to prices, and the PCP deals that many of us now use to run a new car. Few want to go on the record for fear of being seen as a prophet of doom, but the concern is real.

The thinking behind this was backed up last week by a report from the Bank of England which highlighted that many motorists will face a hike in monthly payments for PCPs as companies try to contend with a drop in the value of second-hand vehicles. Manufacturers are being squeezed further by the depreciation of the pound, which has fallen from 1.31 to 1.13 Euros since the referendum.

While the report didn’t explicitly mention the B-word, it’s clear the uncertainty surrounding our future trading relationship with the rest of the world is having an impact. And regardless of whatever is negotiated Brexit-wise, the weakness of the pound will ensure cars made abroad will become more expensive. Higher new prices and lower used values can mean only one thing – more expensive PCPs.

Of course at this stage, nothing can be cast in stone. But as the months pass, it does seem to be increasingly clear that the momentous vote will have repercussions over what we pay for cars. Ally that to ongoing disquiet over the whole car finance model, and you can’t help but feel we should make the most of this golden age for deals, because it’s unlikely to last forever.

Do you agree with Graham that Brexit uncertainty could have negative effects for British drivers? Let us know in the comments section below...