Fast and Furious Live 2018: behind the scenes

Fans of the Fast & Furious film franchise will get to see the action for real with a new live show. We went behind the scenes 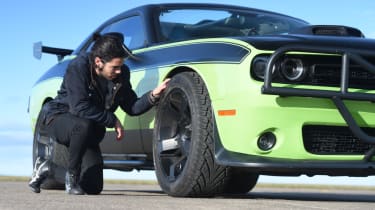 As far as car films go, it’s hard to argue against the success of the Fast & Furious franchise. It’s 16 years since the original movie came out, with Universal Studios having wrapped up its eighth iteration earlier this year.

Now the franchise is about to be reformed once again, this time in a spectacular live show taking place in January at the O2 Arena in London. Auto Express spent some time behind the scenes, talking to some of the drivers, choreographers and producers of the show to get a sense of what to expect from Fast & Furious Live.

Although the event will take place at the O2 Arena, we’ve come to the old army barracks at Cottesmore, Oakham, East Midlands, where some of the rehearsals are taking place. The live event is the brainchild of Rowland French, whose CV includes the creation of the Top Gear Live show after a stint as producer on the BBC television series.

French tells us that Fast & Furious Live has been in development for more than four years, with the team creating a brand new storyline through a medium he calls ‘live automotive theatre’. Although the show’s theme will be fresh, French confirmed fans of the films will be able to spot bits from the various movies.

The whole event will take place on a purpose-built 25-metre by 50-metre stage set which will be moved to each of the show locations in the UK, Europe and the United States. This doesn’t give too much space to play with, which is why Colin Sangster, the choreographer and artistic director, tells us each stunt is carefully thought out.

In fact, all of the stunts in the two-hour performance are first played out with small, model cars. Sangster said: “I start with toy cars in my conservatory, driving them around, helping me form my ideas for the full-size choreography.” 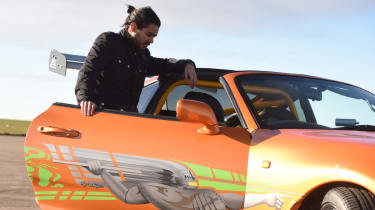 Once fleshed out, Sangster then introduces his choreography to the specially trained drivers in a walk-through of the cars, teaching them the routine without actually turning a wheel. “We walk through the choreography first, just like it was in the dance world,” Sangster explained, a nod to his past as a dancer and choreographer at the Scottish Ballet.

While the on-stage movements are fleshed out by Sangster and his drivers, another set of rehearsals takes place with the set designers and digital producers in charge of the light show. One aspect the producers are especially proud of is the state-of-the-art 3D projection mapping that will accompany the cars during the show.

Using a multitude of projectors, digital imagery will be beamed on to the show floor to help colour the set with video designed for each specific scene. In constant communication with transponders mounted in the back of the cars, the projectors will have a real-time understanding of where each of the vehicles is on stage and will project imagery on to each of them (or avoid them completely). 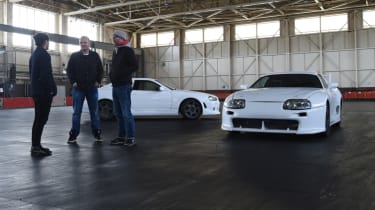 This new technology is still very much in its infancy, so multiple innovations were required in order to allow the equipment to work flawlessly. One problem was the road surface, which had been designed specifically for the 3D mapping; the build-up of black marks as the cars slide around the stage threatened to cause some issues with the mapping technology. To work around the problem, lead stunt driver and head of vehicle procurement Chris Burns collaborated with Taiwanese tyre manufacturer Nankang to design and develop bespoke rubber that leaves no black residue when the wheels are spun.

On the subject of tyre wear, it wouldn’t be Fast & Furious without some serious horsepower in the mix. Fans of the franchise will instantly recognise the Mk4 Toyota Supra featured in the first movie. Although the exact model from the film isn’t available, Burns has built an identical replica of the Supra that has more than 700bhp on tap.

However, the wide-bodied Dodge Charger and the infamous Flip Car from the latest and the sixth iteration of the series are on hand and will be used in the show. Burns said procuring some of the vehicles, such as the three black Honda Civics from the first movie, wasn’t always easy. 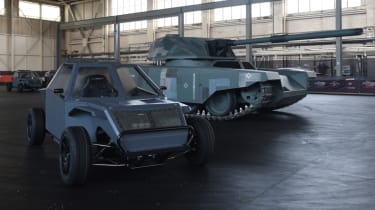 “It is hard enough to find cars like three identical solid Honda Civic coupés to use in the show, but finding the parts required to turn them into the cars you recognise from the screen is even harder,” Burns explained.

Opening night will be on 19 January at the O2, but for now the team is about to go into the second phase of rehearsals, bringing the driving, tech, acting and musical elements together for the first time. We were ushered out before the full action took place, but one thing’s for sure, Fast & Furious Live will be quite a special event.

The show will be visiting Manchester, Birmingham, Liverpool, Newcastle, Glasgow and Belfast.

Does the prospect of a Fast & Furious live get your engine revving? Let us know in the comments below...