Graham Hope relives the theft of his car from his North London home, and the sluggish police response… 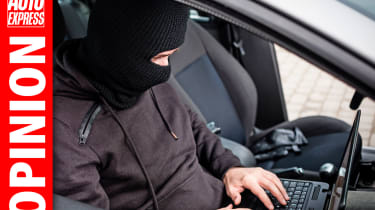 Who believes in fate? Two weeks ago, we reported on the dramatic rise of hi-tech vehicle theft. Last week, I became the latest victim.

It was a textbook case. My test car was parked up overnight on my driveway in a quiet suburban area of North London. The next morning it was gone. I still had the keys; it had simply vanished. With a tracking device on the car, I immediately called the maker’s On Call service, which I’d subscribed to, to see if it could be traced or immobilised.

The chap on the line was very sympathetic, but explained I would need to speak to the police first before he could do anything. So that’s who I called next, to be told that only the “investigating officers” could speak to the On Call service and that they’d phone me back. This they did; seven hours later.

By that stage, the car was probably on its way out of the country. Everything about the theft smacked of it being a ‘pro’ job. The culprits had simply hacked the keyless go entry system and driven off, with the car apparently “invisible” to the tracking company.

But what really jolted me was my second conversation with the police, which lasted a mere five minutes. I was asked a few cursory questions and then told: “We won’t be able to investigate this further.” It felt like the ultimate box-ticking exercise.

Surprised, I spoke to a copper acquaintance of mine, who said this was par for the course. “We no longer provide a service to the public,” he told me. “We are so far behind the curve we’ve become a response service only. If the public weren’t so apathetic to what’s going on they’d realise we’re sleepwalking into a lawless society.” An apocalyptic vision indeed.

I’m told my car is now likely on its way to Africa or Eastern Europe. That’s shocking enough. But it’s the casual acceptance of its fate that will be my lasting impression of the whole sorry episode.

Have you suffered a similar car theft? Tell us about your experience in the comments area...