New Hennessey Venom F5 to pump out over 1,800bhp 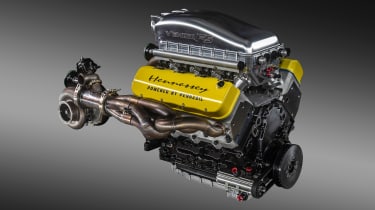 Hennessey Performance has confirmed the engine specifications for its forthcoming Venom F5 hypercar. The Texas-based tuning company will build just 24 examples of the potentially record-breaking car, which the firm suggests will hit 300mph. Each one will have a price-tag of around £1.2 million.

Hennessey claims the Venom F5 will be able to accelerate from 0–186mph in less than ten seconds, which is quicker than a Formula One racer. The sprint from 0–249mph and back to zero can supposedly be handled in less than 30 seconds, beating the world record-holding Koenigsegg Agera RS by over six seconds.

Back in 2014, Hennessey targeted a 290mph top speed for the Venom F5, which would make it one of the world’s fastest production cars. The Koenigsegg Agera RS currently holds the official production car top speed record of 277.9mph – although Bugatti recently set an unverified record with a Chiron SuperSport prototype, at a speed of 304.7mph.

Hennessey has designed an all-new carbon fibre body for the Venom F5, which tips the scales at 1,338kg – making it around 100kg heavier than its predecessor, the 270mph Venom GT. However, the American firm claims that the engine’s 1,800bhp-plus output will provide the F5 with “the best power to weight ratio on the market.” Active aerodynamics will also offer a competitive drag coefficient of 0.33cd. 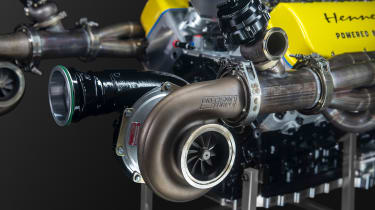 Our most recent update for Hennessey’s hypercar project came from the 2017 SEMA Show in Las Vegas. The American tuner released the first images of the Venom F5’s interior, which will be clad in carbon fibre and quilted upholstery. Fabric pull cords will be used instead of solid door handles, while the seats will be trimmed in Alcantara rather than leather.

Should Hennessey’s renders be accurate, the Venom F5’s steering wheel will be trimmed in a blend of carbon fibre and Alcantara – and it could feature a Formula One-style digital display in place of a traditional boss. An infotainment screen will sit in the centre of the carbon fibre dash, with rotary heater controls being housed in the centre console.

Hennessey Performance has unveiled interior shots of its new 300mph Venom F5 hypercar, which was launched at the SEMA Show in Las Vegas earlier this month.

The Venom F5’s cockpit is clad in carbon fibre, most noticeably on the dashboard, doors and on the floor – as well as on parts of the steering wheel. Pull cords are used instead of the traditional door handles, with the seats and steering wheel covered in what appears to be Alcantara rather than leather.

Quilted yellow upholstery can also be seen along the doors and on the dashboard. An information screen sits on top of the centre console, along with a Formula One-style digital display on the steering wheel. 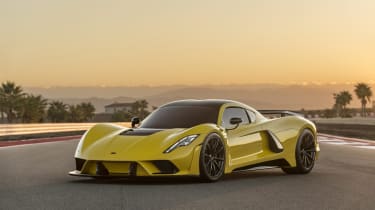 The Texas tuner will build just 24 examples of the potentially record-breaking Venom F5, at a price of around £1.2 million. It's predecessor, the Venom GT had a 270mph top speed, thanks in part to its lightweight Lotus Exige body and twin-turbo Chevrolet V8 engine.

The Venom F5 is powered by an all-new twin-turbo V8 engine with 1,600bhp – 250bhp more than the Venom GT. Back in 2014, the company was targeting a 290mph top speed figure for the Venom F5, which was named after the highest rating on the Fujita scale.

A revised clean-sheet carbon fibre body has been designed, which tips the scale at 1,338kg. That’s nearly 100kg heavier than its Venom GT predecessor, but active aerodynamics work in tandem with the vehicle to produce a slippery drag coefficient of 0.33cd. 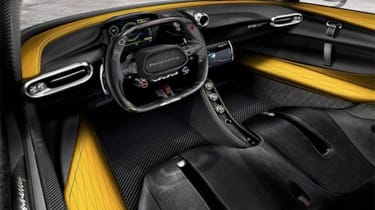 Hennessey claims that the Venom F5 can accelerate from 0-186mph in less than 10 seconds, which is faster than a Formula One car. The sprint from 0-249mph and back to zero will supposedly be done in less than 30 seconds, beating the world record-holding Koenigsegg Agera RS by over six seconds.

Koenigsegg currently holds the production car top speed record of 277.9mph, which was set earlier this month by the Agera RS. Hennessey previously held the unverified record of 270mph, which was set by the Venom GT in 2014. However, that test was run in only one direction rather than two, therefore not fitting the Guinness Book of Records criteria.

Can the Hennessey Venom really top 300mph? Let us know what you think in the comments!