The Italian racing constructor has previously helped develop the KTM X-Bow and Alfa 4C, but will now be going it alone 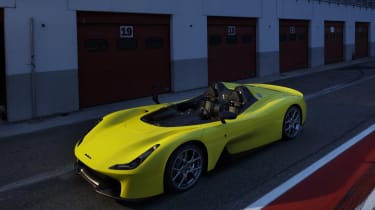 In standard form the Stradale features no doors or windscreen, but roadster and targa variants are available to customers, as well as a coupe with gullwing doors.

The Stradale (Italian for road) weighs just 885kg in standard trim thanks to extensive use of carbon fibre and composite materials. Dallara has used CFD virtual design to craft the car along with extensive wind tunnel testing to hone the aerodynamics. As a result, the Stradale is claimed to develop over 2G of lateral force during cornering and over 820kg of downforce at high speed. 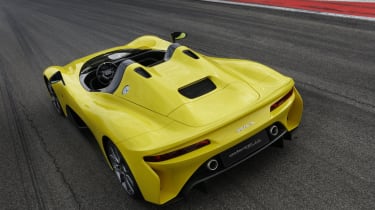 Power comes from a 2.3-litre supercharged straight-four engine producing 395bhp. Dallara has collaborated extensively with electronics company Bosch, with the German conglomerate providing the latest ESP stability control system for the Stradale. Power is fed through a six-speed manual gearbox, with an automatic transmission available as an optional extra.

The power and weight figures, along with its aerodynamic design, puts the Dallara Stradale among the likes of track-day specialties such as the Lotus Exige and BAC Mono.

Founder Giampaolo Dallara was first to recieve a Stradale last year, with first customers taking delivery now. Dallara founded his company in 1972 as a constructor of racing cars with huge success in Formula Three.

As well as F3 cars, the Italian firm currently develops chassis’ for the IndyCar Series and the rapidly expanding all-electric Formula E. It has also developed road cars in conjunction with major brands, lending its hand in the development of the KTM X-Bow and Alfa Romeo 4C.

Do you like the look of the Dallara Stradale? Let us know in the comments...