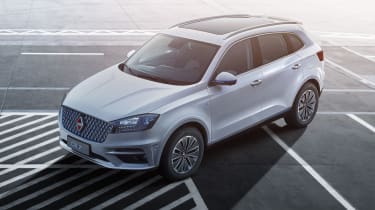 Borgward models are already sold in many European markets, including Germany, but the announcement means that we can expect the BX5 and BX7 SUVs - including their electric-powered BXi5 and BXi7 counterparts, to go on sale towards the end of 2019.

At the Guangzhou Motor Show, the sportiest version of the BX7 – known as the BX7 TS - was centre stage for the firm. Prices of the company’s largest SUV are yet to be confirmed for the UK, but elsewhere in Europe it’s priced from around €44,000 (£39,300 approx).

The BX7 itself has been homologated for left hand drive European markets and is now ready for launch. Re-launching the Borgward name – historically not known for SUVs – in a market like China, has granted the brand valuable experience before its German homecoming, according to Chief Design Officer Anders Warming.

The identity of the new Borgward is still something European consumers are unsure of, Warming added. The firm will use internet sales in Europe too, rather than open bespoke dealerships.

Are you keen for Borgward to enter the UK market with a right-hand-drive car? Tell us below!