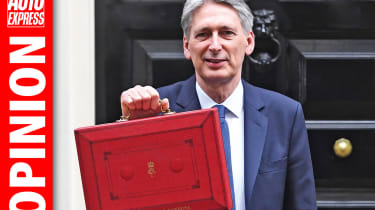 Seems a decent man, Philip Hammond. But can anyone remember anything he did for the motorist or the car industry from 2010-11 as Transport Secretary? Me neither.

He talked of 80mph motorway speed limits. But they didn’t materialise. Now he’s Chancellor, there are plenty of other hints from Phil, but I fear he won’t deliver.

Take early 2017. He said enough to hint a scrappage scheme may be on the cards – which it wasn’t. Then, he put his name to an eve of Autumn Budget column in which he stated that the “dream” of driverless cars will “soon” (you sure?) become a reality. Never mind that our roads, the police, Department for Transport, insurers, courts and consumers are simply unable to accommodate, accept or afford expensive autonomous cars in the short or medium term. Yet Phil remains convinced. Ish.

“We can embrace it [driverless tech] and take full advantage of what is in front of us,” he wrote. “And my Budget will include plans to make Britain a world leader in this area.”

But, er, his Budget didn’t, really. And Britain won’t – unless it can catch the Japanese, Germans, Koreans, Americans and others who’ve been spending untold billions on driverless research and development and prototypes for decades while we’ve being doing little.

Why was Chancellor Hammond super keen on driverless cars the Sunday before his Budget, but apparently far less enthusiastic during his Commons speech the following Wednesday? Maybe he heard me on national telly and radio warning him his claim that “the driverless car industry means tens of thousands of jobs” for Britain is horribly misleading as millions of income tax-paying taxi, van, truck, bus, coach and other drivers, plus driving instructors, will be made redundant – and forced to claim unemployment benefits that, ultimately, Hammond’s Treasury coffers must fund. Socially and fiscally, that’s not clever, Phil.

And where’s his evidence that beleaguered car users actually want, feel comfortable with and are willing to pay for driverless cars that’ll cost far more to purchase and insure than those we’re happy to drive ourselves? Truth is, he hasn’t asked the motoring masses. He has no evidence. The Chancellor, like you, me and the auto industry, hasn’t a clue whether autonomous cars will be a hit or miss. Is the car that drives itself a classic example of tech chasing and trying to serve a market that doesn’t exist?

What impact will autonomous cars have on the car industry? Tell us what you think in the comments!