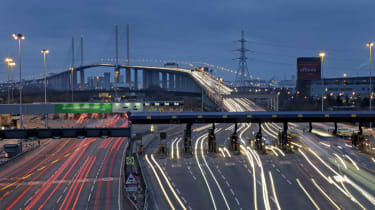 The Government has made more than £92 million from Dartford Crossing fines in the last financial year, up from £60 million the previous year.

Official accounts show total income for the crossing over the river Thames was £204.5 million for 2016/17 financial year (up from £168.4 million in 2015/16), with almost half of all income being made up of “enforcement” action, or fines.

• All you need to know about The Dartford Crossing toll

The report attributes the spike in revenue to “increased use of enforcement management measures introduced through the Dart Charge scheme and an increase in the number of crossings over the period” – though traffic was only up by 2.7 per cent compared to the previous year, while enforcement action increased 53 per cent.

Total revenue from fines would have been even higher, but £42 million’s worth were written off due to “penalty charges not issued on a timely basis, service provider error, and drivers’ vehicle keeper’s details not being available”.

The report’s authors also highlight that the entire cost of the bridge and two tunnels over the Thames at Dartford was fully paid off by March 2002, but penalties and toll fees from the new Dart Charge initiative are expected to bring in £1.6 billion over a 25-year period.

Instead of paying at a tollbooth barrier as was previously the case, the Dart Charge – introduced in November 2014 – means drivers using the Dartford Crossing are now automatically identified by number plate recognition (ANPR) cameras, and must remember to pay for their trip via phone, app, online, postal or Payzone services.

Failure to pay for the crossing results in an automatic penalty of £70 being issued, though this is reduced to £35 if paid within 14 days, while first-time offenders are sent a warning letter, rather than a fine.

Commenting on the fines, Jack Cousens, head of roads policy with the AA, said:

“It seems that while drivers are still getting it wrong, there is little desire to rectify the reasons why people do not pay and simply reap the fines.

“Locals are getting the message, but for drivers further afield it simply isn’t clear that a toll is due. There still isn’t a Payzone at the Dover ports or the services immediately around Dartford which would help increase the number of drivers paying the toll.

“In reality though, the toll should not be in place. The infrastructure was paid off years ago and we would like the Crossing to follow in the footsteps of the Severn Bridge and remove the charge altogether.”

“These latest set of accounts for the Dartford Crossing show that Dart Charge is being administered efficiently and effectively, collecting net proceeds of £61.9m during the 2016-17 financial year to be ploughed back into UK transport.

Should the Dartford Crossing still have tollbooths? Let us know below...