As the World Rallycross Championship hits Silverstone this weekend, we drive the purpose-built track in 310bhp RX2 monster

The World Rallycross Championship (World RX) is rapidly becoming the next big thing in motorsport – and as WRC seems to be losing its appeal year-on-year, certainly in the UK, rallycross is increasingly where it’s at nowadays.

So much so that there’s a round of the championship at Silverstone this year, taking place on a brand-new purpose-built course, and with all sorts of feeder formulas to support it.

In the main event, manufacturers like Audi, Volkswagen, Peugeot and Hyundai hammer it out for overall honours, the cars being driven in frantic head-to-head races by the likes of Sebastien Loeb, former DTM title winner Mattias Ekstrom and Petter Solberg, among others.

But in the RX2 support category, the cars are all identical mechanically and the drivers less well known – for the time being. And that’s the machine we got to sample the new Silverstone track in. 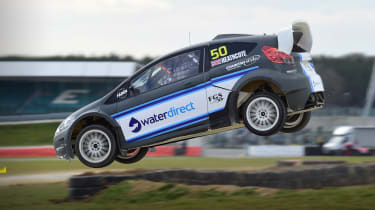 The car we drove is run by Team Färén and its regular driver is the 2017 British Rallycross champion and all-round top chap Nathan Heathcote. Before we got behind the wheel, he showed us what it could do and, more to the point, what not to do around the new Silverstone rallycross track. Which – as we’d soon discover and as you can see from the pictures – has one almighty great jump in the middle that requires technique, and not just courage, to get right.

Not that the car itself is easy to tame. It makes 310bhp from a 2.4-litre engine, is four-wheel drive, costs into six figures to run for a season and is the ideal machine in which to learn the art of rallycross. Even from the passenger seat.

Off the line, Heathcote drops the clutch and the Fiesta fires itself to the first corner, a right-hander that tightens at the exit and leads into a slower, even tighter right and then to a really sharp left turn over mud before a longish straight that leads up to the jump. 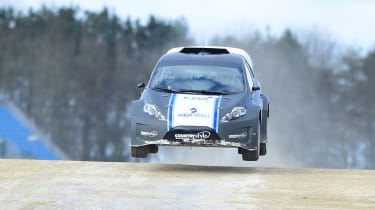 Heathcote is very smooth, calm and controlled with his inputs, employing a mix of delicacy and aggression that enables him to hustle the Fiesta round the part-mud, part-tarmac course with some spooky speed and precision.

The Ford feels quick in a straight line but not wildly so, with a decent balance of power and grip, yet also a real sense of agility. We climb out after four laps, dazed by the noise and sheer violence of the experience, but reasonably sure which way the track goes and certain that we won’t be doing what Heathcote had been doing!

And then it’s our turn. Off the line, the acceleration is at least Porsche 911 strong, but it’s the speed and severity of the gearchanges, plus the relative softness of the suspension, that initially seem most surprising. The car eats gears seemingly every half a second in a straight line (the six-speed sequential box is very short-geared) and the noise it makes in the process is deafening.

But the way the Fiesta glides across the rough ground on its smooth suspension is massively impressive. As is its pure agility, which is something that separates it from the 600bhp rallycross ‘supercars’ in the top class and allows it to feel more at home, so the pros reckon, around the tight and twisty Silverstone track. 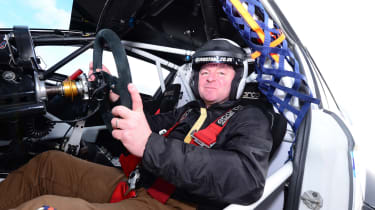 To us, and in this car, the layout of the track feels just right. There’s enough space to be able to overtake in several places and it should make for great spectating when the cars race here for real this weekend.

But in the end, the jump defines both our time in Heathcote’s brilliant little Fiesta RX2 and the track itself – because it’s fantastic… if you get it right. If you get it wrong, however, the jump can be very painful indeed, not to mention rather expensive in broken car parts. The technique, as Heathcote demonstrated to us, is to give it full beans on the way up the ramp, but to then back off just before you get airborne in order to bring the nose down a touch so it doesn’t smash into the tarmac on the other side. Which is what several drivers had managed to do during practice earlier in the day!

The first time we went over the jump, we were probably a bit tentative and the landing wasn’t that bad; just a loud-ish thud and a surprisingly soft impact and away we went, down the next straight, up to a horribly tight hairpin, along another short straight then through a fast section of esses and across the start-finish line to complete the lap.

On our second lap, however, we went at it a bit harder, slid the Fiesta about quite nicely over the mud sections and then, well, got the jump ever so slightly wrong. And landed on the nose at heaven knows what kind of speed, accompanied by an almighty thump from which our back has yet to recover.

Fortunately, however, nothing fell off, and nothing started to leak out of the Fiesta’s nose, either. We came away after another few laps grinning from ear to ear, convinced this car on this track is as good as it gets on four wheels. 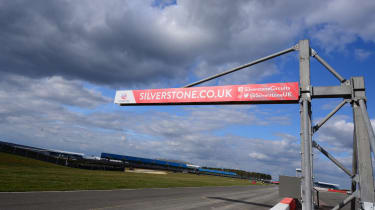 Because even with a mere 310bhp, the RX2 is a proper weapon, especially around a track like Silverstone, which is maybe a little too tight for the rallycross supercars but just perfect for something as small, agile and capable as this.

So thanks Nathan and Team Färén for letting us have a go and the very best of luck for the rest of the season.And as for the future of World Rallycross generally, it looks very bright indeed.

After all, for a petrolhead, what’s not to like about some of the world’s best drivers going head to head in cars with 600bhp, and which can hit 60mph from rest in under two seconds, six abreast into turn one, sideways – for six laps?

It’s enough to make Sebastien Ogier’s dominance of the Word Rally Championship seem ever so slightly boring in comparison, so no wonder that rallycross is taking off. Literally, more often than not, in this instance! 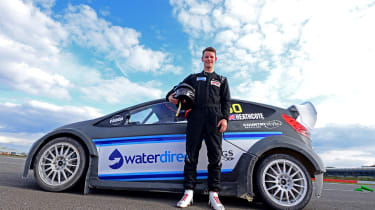 The 21-year-old Heathcoate competed in the RallyX on Ice series in Sweden and Norway earlier this year, impressing with his lightning starts away from the line. He kicked off his RX2 title campaign at the Mettet round in Belgium earlier this month.

RX2 is a ‘spec’ category for identical 310bhp, mid-engined, four-wheel-drive race cars, with Ford Fiesta-style bodywork, built by Olsbergs MSE in conjunction with Avitas Motorsport. It’s a support series for the future stars of the world championship, with rounds held on the support bill of selected FIA World RX events. In 2018, it’s running at Belgium, the UK, Norway, Sweden, Canada, France and South Africa.

Which do you prefer, World RX or WRC? Let us know in the comments below...