Prototype 'robo-cones' move out from the side of the road at the touch of a button, closing off lanes only when needed 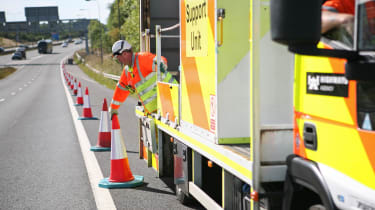 A new generation of traffic cone that could ease congestion and improve worker safety has been developed by construction giant Costain.

The prototype ‘robo-cones’ sit by the side of the road when not in use, and can be ‘driven’ onto the carriageway to close lanes when required.

Closing lanes with traditional traffic cones is a notoriously dangerous job, so workers often shut off large sections of road at a time to avoid making treacherous sorties more often than is essential.

But the new robo-cones can sit by the side of the road when not in use, moving into position at speeds up to 4mph when needed. By risking traffic cones rather than highways staff, workers could close off small sections of a road, potentially saving motorists from driving past vast swathes of coned-off carriageway.

The most dangerous part of setting up a row of traffic cones is the ‘taper’ – the angled start of the line that begins at the edge of a lane and moves out to close it completely.

Presenting his company’s cones at the Cheltenham Science Festival, Costain’s Richard Gollege said: "It takes 15 minutes to do a taper, but with the remote controlled cones it will take less than a minute.”

William Clifford, another Costain staff member involved in the project, explained that the prototype cones are not autonomous, requiring someone to send them out via remote control. Clifford said autonomous cones that could come out automatically “would be perfect”, though he conceded “we are far from that”.

Clifford said the main motivation behind the robo-cones’ invention was that “people die” when laying out traditional cones, but he added: “It is also important to cut down the amount of time lanes are coned off to make it better for the motorist.”

One traffic-management company was fined £100,000 in 2010, after a worked died collecting cones from the central reservation of the M4 motorway.