The £12.50 daily ULEZ charge has come into force. Here are the facts about the charge, the zone map and the cars affected

The £12.50 ULEZ (Ultra Low Emission Zone) charge for driving in London and the £11.50 Congestion Charge and have been suspended from Monday 23 March 2020 "until further notice". This is a result of the coronavirus pandemic.

The London Ultra Low Emission Zone (ULEZ) impacts an estimated 2.5 million vehicles that drive in the capital each year.

The ULEZ Zone initially covers the same geographical area as the London Congestion Charge Zone, but will soon expand to take in most of the city.

Owners of affected cars have to pay a daily charge to drive into the zone, which, unlike the Congestion Charge Zone, operates 24 hours a day, 365 days a year.

The ULEZ has been introduced in London to cut emissions of nitrous oxides and particulates in the city with the aim of improving air quality.

But what is this new ULEZ charge, what area does it cover and which types of vehicle are affected? We answer these questions and more in our ULEZ guide below.

What is the ULEZ?

The Ultra Low Emissions Zone is an area of London where the most polluting vehicles must pay a levy in order to use the roads. The ULEZ charge replaces the existing T-Charge.

While the ULEZ initially covers the same area as the Congestion Charge Zone in central London, from 26 October 2021 it will expand to cover all areas inside the North and South Circular roads.

• Petrol or diesel: which is the best fuel choice for you?

The charge, which must be paid on top of the £11.50 daily Congestion Charge, is set at a standard rate of £12.50 – although this varies depending on the vehicle – and is in effect 24 hours a day, seven days a week.

The ULEZ charge and the Congestion Charge in combination bring the total cost for some vehicles entering London between 7am and 6pm on weekdays up to £24.

Which vehicles are affected by the ULEZ?

Generally speaking, the ULEZ affects pre-Euro 6 diesels – those built before around 2016 – and pre-Euro 4 petrols built prior to 2006. Some petrol models that meet the Euro 4 standards were available from 2001 onwards, however.

As well as non-Euro 6 diesel cars and vans, and non-Euro 4 petrols, non-Euro 3 motorbikes are targeted. Historic vehicles – those built before 1979 – are exempt from the ULEZ, as long as they have been awarded historic vehicle tax status.

You can use the Transport for London (TfL) checker tool to determine your vehicle’s emission standard status. Affected drivers who forget to pay the ULEZ will be fined £160, reduced to £80 if paid within 14 days.

How to pay the ULEZ charge

There are various ways of paying the ULEZ charge. If you drive into the zone regularly in a vehicle that isn't exempt, you can register for the Auto Pay system for an annual fee of £10. This covers the congestion charge but will be expanded to cover the ULEZ, too. Click here for the Auto Pay website.

You can make individual payments online via the TFL website or through the TFL phone app. Finally, you can pay the ULEZ over the phone by calling 0343 222 2222.

The map below shows the current ULEZ zone that mirrors the current Congestion Charge zone in orange and the expanded ULEZ zone due to take effect from 26 October 2021 in yellow. 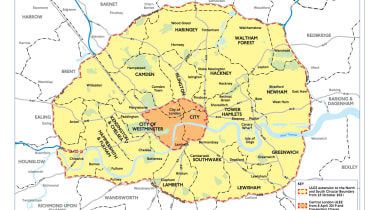 What will the result of the ULEZ be?

The latest estimates from TfL suggest that between 2.4m and 2.5m unique vehicles will pay the ULEZ daily charge annually, but claims most of them will be “infrequent” visitors who only enter the zone about once a year.

In addition, City Hall predicts 100,000 Londoners will no longer live in areas with illegal air quality limits from 2021, with all areas of the capital predicted to see an overall fall in pollution.

TfL says ULEZ will be especially beneficial to the young, older people and those who have respiratory problems, as well as residents of high pollution areas.

Provisional data from TfL for the first two weeks of ULEZ suggests around 91,000 vehicles enter the zone every day, of which roughly 70 per cent are compliant. Prior to 8 April, around 55,000 compliant vehicles regularly entered the zone each day, compared with 35,000 non-compliant ones.

According to MPs, carmakers should pay for air pollution. Do you agree?