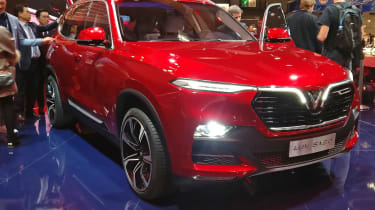 VinFast, a brand-new Vietnamese car company, is to launch its first ever models at the Paris Motor Show, both of which have been designed by legendary Italian styling house Pininfarina.

The two models, the LUX A2.0 saloon and LUX SA2.0 SUV, are premium cars that Pininfarina has been involved in designing from the ground up. According to the firm, it wanted to incorporate the VinFast philosophy – 'Vietnamese, Style, Safety, Creativity, Pioneering' into the cars. It has created a brand identity for the company that might be familiar to Vauxhall fans, too, as both cars are adorned with a V-shaped logo on the nose.

Overall, the LUX A2.0 and LUX SA2.0 feature contemporary looks. The A2.0 is a traditional four-door saloon that has a long bonnet, set-back cabin and raked rear screen to give it a sporty feel. Chrome trim picks out the sides of the car, while the V-shaped grille blends into the super-slim daytime running lights. The V motif also appears at the rear of the car with a similar light signature as the front of the car. 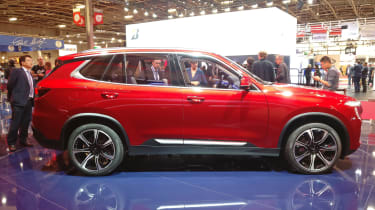 Inside, the cabin has a clean, uncluttered look, and the dashboard features digital displays, with the tablet-style touchscreen on the centre console angled towards the driver. There's LED ambient lighting, while the cabin has as few buttons as possible.

The SA2.0 is pure SUV, with a traditional design that's reminiscent of the BMW X5. The nose gets a similar look to the saloon, with the V-shaped logo blending with the daytime running lights. There's subtle plastic wheelarch extensions and more cladding for the bottoms of the doors, while the rearmost pillars feature a floating roof design. At the back, the SUV repeats the saloon's look, with lights that extend across the tailgate to meet at the V-badge in the middle.

Paris saw some technical information released about the two models. As their names suggest, they come with 2.0-litre power, in the form of a petrol four-cylinder unit with 174bhp and 300Nm of torque, while the LUX SA2.0 also has a 228bhp version on offer. All cars get an eight-speed ZF automatic gearbox.

VinFast is in the advanced stages of constructing a huge 898-acre factory in northern Vietnam. For scale, Ford’s Dagenham plant rests on 475 acres – though VW’s Wolfsburg plant covers 1,600 acres. 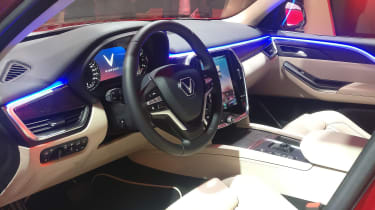 VinFast is a subsidiary of Vingroup, a Vietnamese real estate conglomerate with interests as diverse as healthcare, education, farming, shopping malls and holiday resorts. VinFast’s chief executive, James DeLuca, formerly of General Motors, says the company has “the resources, scalability and commitment to become a significant new player in the global automotive industry”.

Bosses have confirmed that right-hand drive is being evaluated, so VinFast may come to the UK. They also hinted that a third model is in the pipeline, an electric city car using a platform borrowed from General Motors could arrive in the next couple of years.

What do you think of the VinFast saloon and SUV? Tell us in the comments section below…