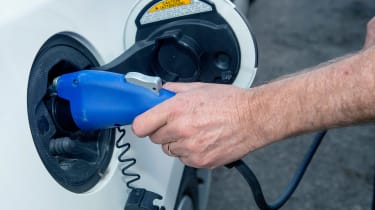 Owners of electric cars (EVs) could be incentivised with cheaper electricity rates or penalised with more expensive ones depending on when they charge their cars, according to the industry regulator.

Ofgem says EV owners should be offered clearly signposted cheaper rates if they charge their cars during off-peak periods. But consumers plugging in their cars during times of high demand could face more expensive energy bills. Customers could also be charged less for electricity during sunny or windy periods, when more renewable energy is generated from solar farms and wind turbines.

• These are the best electric cars

Previous research from Ofgem has found that if 40 per cent of current car owners switched to an EV, almost a third all ‘low-voltage networks’ (which carry power from transformers to customers) would have to be upgraded. But if ‘flexible’ charging was used, over 60 per cent more EVs could be charged up before network “reinforcement” is required, ultimately saving money for bill payers.

One model of flexible charging would see smart meters indicate off-peak or low-cost times to consumers, who could then charge their cars more cheaply. Automated charging could also make optimal use of the network, with EV chargers turning on of their own accord during periods of low network demand.

But Ofgem warns that EV owners who plug in their cars during peak times could be charged more, as “under current arrangements they will impose considerable costs which will be borne by all consumers”. To discourage this, the regulator says “users who want to consume a lot more at peak times” may “need to pay the associated additional network charges.”

Around 11 million UK households already have ‘time of use’ tariffs, which make use of smart electricity meters to inform energy suppliers when electricity is being drawn, allowing charges to be raised or lowered based on network demand.

• What would ‘flexible charging’ involve?

By making “price signals” more obvious to EV owners, calculating usage regularly with a “half hourly settlement”, deploying smart meters and enacting “time of use” energy tariffs, the relatively high demand that EV charging places on the network could be minimised. These savings could then be passed onto consumers, as less infrastructure investment would be required.

Ofgem’s report also considers vehicle-to-grid (V2G) charging, where EVs store excess electricity from the grid during times of low demand and feed it in back when required. While V2G charging could provide “valuable grid services” and is currently being trialled by Nissan and OVO, Ofgem warns it requires “sophisticated infrastructure”.

More and more drivers are converting to electric cars. But would an EV meet your needs? Our guide lays out the pros and cons…