The GT2 RS Clubsport is the powerful 911 ever and gets full track trimmings plus £360,000 price tag 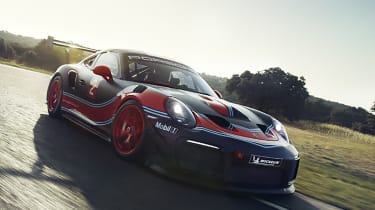 Porsche has unleashed a new track only 911 GT2 RS at the Los Angeles Motor Show, intended as a send-off for the 991-generation GT2 RS and limited to 200 units.

A track-only offering not homologated for road use, the 911 GT2 RS Clubsport uses the same twin-turbocharged 3.0-litre flat-six as the regular GT2 RS, producing a maximum output of 690bhp and sending power to the rear wheels via a seven-speed Porsche PDK twin-clutch transmission.

With the exception limited slip differential’s setup, the drivetrain is lifted wholesale from the 911 GT2 RS and the recently reborn 935. However, the rest of the 911 GT2 RS Clubsport transforms into something wholly uncompromised for track driving.

Weight saving techniques shed 80kg from the car’s weight, bringing total mass down to 1,390kg. The cabin has been totally stripped out, leaving just one racing seat for the driver. A new, removable carbon-fibre steering wheel with shifter paddles and a colour display sits in front of the six-point harness equipped seat, and is taken directly from the 911 GT3 R race car. A full roll cage has been equipped too, but an air-conditioning system remains. 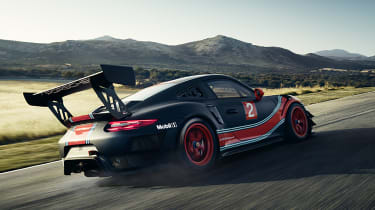 Traction control and anti-lock brake systems are also still equipped. Both can be adjusted or switched off through proper motorsport derived map switches found on the centre console.

The car’s lightweight body uses plenty of carbon fibre reinforced plastic. The new rear wing is made from the material, as is the roof – now complete with an FIA certified escape hatch – plus both the front and rear hoods. A 115-litre racing fuel tank has been added, plus a built-in fire extinguisher system.

Six-piston aluminium calipers in combination with ventilated and grooved steel disks 390mm in size provide stopping power at the front, and a four-piston setup is found at the rear, clamping down onto 380mm disks. The suspension is fully adjustable, featuring MacPherson struts at the front and a lightweight multi-link suspension set-up at the back.

Does a track-only Porsche 911 GT2 RS appeal to you? Let us know in the comments below...