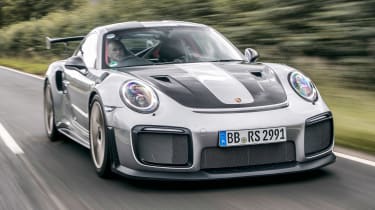 Porsche 911 GT2 RSs don’t come along particularly frequently, and they appeal to a very specific type of buyer. They’ve always had a fearsome reputation, too, but the latest generation exhibits ferocious performance allied with an extraordinary delicacy. Good as it is, though, the car’s £100,000 premium over the GT3 is hard to justify. Not that buyers will care.

Porsche’s latest and maddest 911 is a bit of a hybrid – not in the electrified sense we’re used to now, but because it’s a crossbreed with elements of the 911 Turbo S and the GT3 RS.

There’s a 3.8-litre flat-six turbocharged engine in the back, driving through a seven-speed PDK paddle-shift automatic transmission and pumping out 690bhp – almost 120bhp more than a 911 Turbo S. 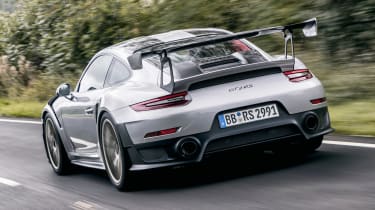 The standard spec includes magnesium wheels, a lighter titanium roll cage and a carbon fibre roof panel and bonnet. The cabin gets six-point harnesses on the seats; outside, you’ll be able to spot a Weissach Pack-equipped car easily enough, because that option brings a body-coloured stripe over that composite bonnet and roof. It also adds a massive Porsche script on the top surface of the sizeable back wing.

Not that you could be left in any doubt on what it is. The GT2 RS is deliberately overt, appealing to a customer who wants to be seen. While the aerodynamic elements are largely shared with the GT3 RS, they’re even more obvious, allowing 340kg of downforce at the car’s 211mph top speed. But that increases that to as much as 450kg if you tweak the adjustable wing.

It’s an RS, and therefore it’s a PDK automatic, simply because it’s the fastest way of shifting. The box clearly works, because Porsche’s hot-shoe racers took a GT2 RS round the Nürburgring in a production car record-breaking six minutes 47.3 seconds, which was a great deal faster than even Porsche had expected. 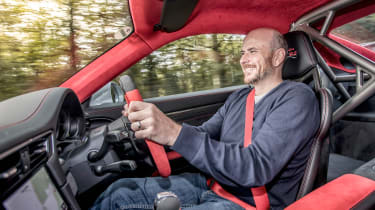 Every connection in the fully adjustable suspension is, bar a single one for the rear-wheel steering, ball-jointed, giving the GT2 RS a singularity of purpose. That should, in theory, make it a hard-riding disaster on the road. The revelation is that it simply isn’t.

We rode in a prototype a few months back in Germany and were impressed. Having driven it now on familiar British roads, it’s clear that Porsche has achieved an incredible blend of taut control allied to a ride quality that’s unsettled by only the very harshest of surfaces.

The damping is superb, and this allows the engine’s huge performance to be readily exploited at will, meaning you’ll pass the legal limit well before the suspension starts to run out of ideas. 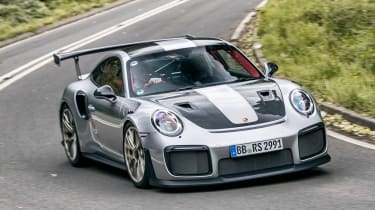 The steering is the best yet in a modern 911. Its eagerness is aided by the rear axle, its weighting is beautifully judged, and the turn-in is immediate and accurate. This means that the GT2 RS builds on the already-lofty heights of the GT3 RS. Grip from the Michelin Pilot Sport Cup tyres is huge, the traction is mighty and aided by a fully variable locking differential whose control is, in turn, assisted by Porsche Torque Vectoring Plus.

All of this means incredible speed, to the extent that the GT2 RS’s capabilities are way beyond what’s possible on the road. Even so, it’s a thrilling, visceral car to drive.

If the engine is lacking anywhere, it’s in voice. The huge shove that the turbo brings between 2,500rpm and 5,000rpm comes with an aural penalty. The bassy tones it generates lack the exotic frequencies of the GT department’s naturally aspirated 911s.

Of course, most GT2 RS customers will have both types of vehicle. And they’ll buy this car because it’s the fastest, most powerful 911 ever. Even if, ultimately, it’s not the GT department car we’d choose.