The law abiding public need to fight against the disruptive pockets of protesters on our roads, says Mike Rutherford 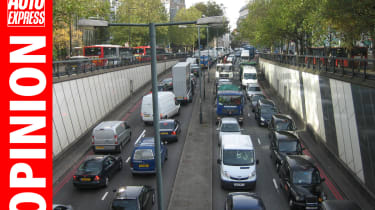 We hear an awful lot – rightly so – about positives such as social mobility, freedom of movement and the ability of law-abiding citizens to go pretty much where we want, when we want, whether on foot, in the saddle or at the steering wheel.

And thankfully, we enjoy other important rights – from formal education and healthcare, to enhanced life and job opportunities. We’re at liberty to make journeys when we like, improving our family, social and professional lives. The freedom to travel to leisure facilities, entertainment venues, shopping centres and holiday destinations is the icing on the cake.

With the above in mind, we residents of Britain don’t know how fortunate – and free – we are.

Shame, then, that there are small, disruptive pockets of people who are too often deliberately sabotaging the roads and public transport services that were set up to give us the freedom and liberty we fought for, pay for and deserve.

The saboteurs are from widely differing camps and clans. There are, for example, the striking railway ‘workers’ who too often refuse to work. Then there are the on-street protesters, who do more harm than good to air quality when they thoughtlessly block the roads. And let’s not forget central Government, which underinvests in transport, thereby making many journeys longer, harder and dirtier than they should be. Some local councils can also consider themselves guilty parties, not least because a growing number seem determined to spend fortunes making already busy, narrow driving/riding lanes even narrower.

As I said, it’s nothing short of wilful sabotage of the roads. And here are a few examples of how the saboteurs do their counter-productive jobs. The other weekend, several of the road bridges crossing the Thames in London were occupied by activists who slowed down or stopped the traffic, increasing the exhaust emissions they say they’re protesting against.

Then, days later, they pulled a similar stunt. The people affected by the deliberate traffic mayhem were those travelling in buses or cars: hard-working men and women, students, tourists, patients struggling to get to hospital, volunteers, kids, mums, dads – salt-of-the-earth folk like that. As with the serial-striking railway workers who regularly down tools and put feet up, the misguided protesters on the bridges hurt life’s little, innocent guys, and not the corporate bosses or powerful politicians whom their beef is really with.

Honestly, I kid you not when I tell you that the people sabotaging the road and bridge network are working in what’s fast becoming a growth industry. Before it’s too late, we –the drivers of the 40 million heavily-taxed motorised vehicles that pay for the building and upkeep of the roads – need to reclaim them from the amateur and ‘professional’ saboteurs.