Dakar Rally: is it the world's toughest race?

We go behind the scenes at the 2019 Dakar Rally to find out what lures drivers, engineers and team bosses back time and time again

Le Mans, the Isle of Man TT, the Indy 500 – some motorsport events truly capture the imagination, holding an almost mythological status among participants and spectators alike. And the most extreme, longest and arguably most exciting race going is the Dakar Rally.

Now in its 41st year, the Dakar remains as gruelling as ever, but it hasn’t all been plain sailing; there have been some issues organisers couldn’t ignore. In 2008, the event was cancelled due to security concerns, and the rally moved from Africa to South America the following year. The name remains unchanged, however, and the excitement unparalleled.

We’ve flown to Peru with MINI, whose motorsport partner X-raid is taking part in the 2019 Dakar – the 40th race every to be run. Our aim? To get up close and personal with the men, women and machines taking part in this 3,100-mile, 10-day rally raid, experience the buzz first-hand, and hitch a ride in one of X-raid’s Dakar cars. 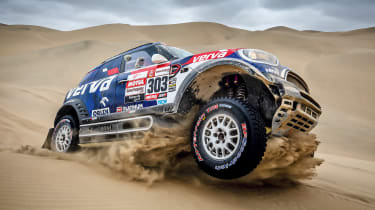 An hour’s drive south from Lima takes us to X-raid’s proving ground in the desert, close to Punta Negra. It’s a desolate spot with an edge-of-the-world ambience, framed by steep dunes and drenched in the baking sun.

This is X-raid’s 16th Dakar, and the team is fielding five examples of the John Cooper Works Rally four-wheel-drive Countryman – as well as three rear-wheel-drive JCW buggies. The Buggy and Countryman both have a steel spaceframe construction and share the same engine: a 3.0-litre turbocharged BMW diesel unit delivering 345bhp and 770Nm of torque.

That torque figure is one of the reasons for choosing diesel over petrol; the other is related to efficiency. The Countryman has a 365-litre tank, while the lighter Buggy carries 325 litres, but running on petrol would require those capacities to increase to 500 litres, adding weight.

Yet while Buggy and 4x4 use the same engines, the drivetrain differences have a major effect, something X-raid technical director Bernard Lindauer explains. “The buggy has advantages over the 4x4 – the weight [it’s about 200kg lighter],” he says. “There is a suspension travel limit of 280mm for the 4x4; for the rear-wheel-drive buggy we are achieving around 400mm of travel. A not insignificant difference.” 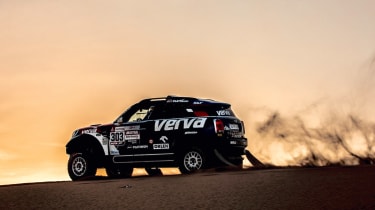 And the disadvantages of rear-wheel drive over four-wheel drive? “The buggy is more sensitive to tyre pressures,” Lindauer tells us. “So it’s allowed to have a self-inflation system, which the 4x4 car is not.”

One of X-raid’s Buggy drivers, Cyril Despres, confirms Lindauer’s point, telling us: “Tyre pressure is really important. If you get it wrong, you can’t climb mountains. We adjust it from inside.”

Punctures are a real risk out in the rock-strewn desert, so the Buggy carries two spares and the Countryman three; driver and navigator have changing them down to a fine art. “We can do it in two minutes,” explains Despres. “That’s already a lot. Even though the race is 10 days, you cannot lose a minute.” 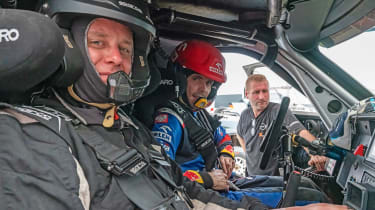 The Frenchman is under pressure to get the Buggy prepared for the race and, wanting to know more about the relationship between driver and navigator, we speak to X-raid founder and chief executive, Sven Quandt, himself a former Dakar driver.

“The navigators are not well known most of the time, but in the car it’s 50 per cent the navigator,” Quandt says. “They must be mother, father, technician. And, depending on the driver, they must also be very strong [willed], because some drivers you cannot slow down. You must have a really strong co-driver who will say ‘no, I think you are too fast, slow down, relax’.”

What about experience? Dakar is famous for attracting former champions from other motorsport fields (two-time World Rally Champion Carlos Sainz is driving one of X-raid’s buggies, for instance), so how well do other motorsport disciplines translate to this unique event? 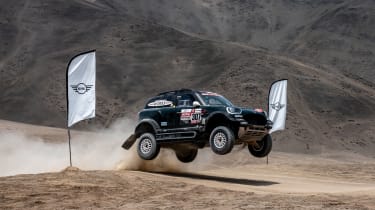 “Each Dakar more is better, whoever you are,” Quandt explains. “Even the most experienced drivers will tell you ‘every Dakar, I’m better’. Below three or four [years’ experience], it’s very difficult to win.”

Knowing how to read the desert is vital, the boss adds. “In terrain like this, why is there a bush? The bush is there because there is some water. And where you have water you will have a ditch. My teacher was a guy who built roads. He explained a lot to me.”

Aside from experience, what else helps make a winning team? “The game is reliability and using your brains,” Quandt says. “You can throw money at it and say ‘I have everything’, but you can’t put every car in the truck [for repairs] twice a day.”

To help prevent such breakdowns, Dakar cars are relatively simple machines. “If you look at the electronics, it’s nothing compared to a standard car,” Quandt says. “Neither the suspension nor drivetrain is electronically controlled.”

We’re called away from Quandt’s company for our co-drive in the Countryman. At over six foot tall, we find getting in tough, but once on board the seating position is comfortable and there’s a brace plate for our feet. An engineer secures the racing harness, checks our helmet and connects a radio lead so we can talk with Jakub ‘Kuba’ Przygoński – our driver for the day. Even though he’s on a break from the vital shakedown, he couldn’t be friendlier.

The engine starts with a roar that sounds more aeronautical than automotive and, as we back out of the service area, I realise how high we are sitting: our eyes are level with those of the engineers standing outside. 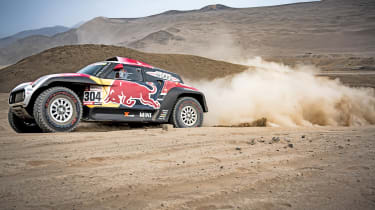 As we blast along a desert straight, the Countryman’s torque is immediately apparent. There’s little difference in how intensely it accelerates at any speed – it’s urgent and endless. Kuba engages each of the sequential box’s six gears with precise ferocity and no dip in revs, the engine kept constantly on-song. We hardly touch the brakes during our ride, friction from the sand acting as a natural anchor.

One incongruous aspect of the Dakar Countryman is how agile and adjustable it is. Despite a dry weight of almost two tonnes, it darts around boulders and rocks with a light-footedness totally at odds with its mass and size. Higher tyre temperatures on the in-car display screen speak of the 4x4 system’s rear bias, something further evidenced by the way Kuba uses the car’s back end to push around corners.

And these things can climb. Near-vertical elevations are despatched as easily as a roadgoing MINI would deal with a speed bump; we ascend a vast dune that looked impassable from the ground on a wave of torque. 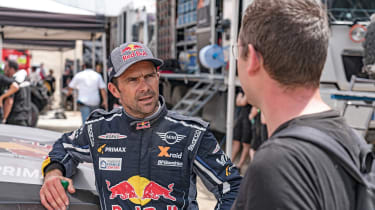 Hidden over this hill lies a series of further dunes, which the 4x4 romps over as if in a playground. We mount steep elevations and pitch down sharp drops as nimbly as a human tackles stairs. The Countryman exhibits nothing but supreme strength and incorruptible stiffness. “It’s a real tank,” one of the engineers confirms as we share this impression after our ride. A tank it may be, but this tank can dance.

Our co-drive took, we are told, around eight minutes – yet such was the adrenaline rush and excitement it felt just two minutes long. Dakar, we hear again and again from drivers, engineers and team owners, is addictive. On the strength of this experience, it only takes one taste to get hooked.

Fight to the finish

MINI was denied victory in the 2019 Dakar – Toyota took first – but five cars from the X-raid team finished in the top 10.

Joan ‘Nani’ Roma came second, while our driver, Kuba Przygonski, was fourth and Cyril Despres fifth. X-raid’s Yazeed Al-Rajhi finished seventh and Boris Garafulic eighth. A strong showing, then, and given the compelling nature of Dakar, the team is almost certain to return with fresh ambition in 2020. We can’t wait.

Do you think the Dakar Rally is the toughtest motorsport event in the world? Lets us know your thoughts below...