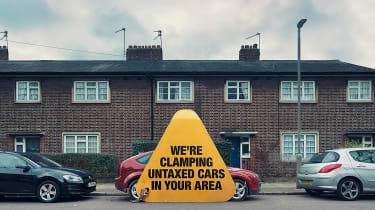 A list released by DVLA (Driver and Vehicle Licensing Agency) showed 27,605 vehicles were clamped and 94,550 fines or penalties were issued in the capital last year – a total of 122,155 enforcements – because their owners had failed to pay Vehicle Excise Duty (VED).

The data was released as part of a DVLA advertising campaign to warn drivers of the consequences of not paying VED.

Motorists who don’t pay their road tax risk facing financial penalties, which can lead to court action and even their car being seized.

Tim Burton, head of enforcement at the DVLA, said: “This campaign has a clear message for anyone who flouts the law in this way – tax it or lose it.

“It’s never been easier to tax your car, so there really is no excuse. We would rather not have to clamp or remove vehicles, but this campaign highlights the consequences of not taxing a vehicle. Having your vehicle clamped is expensive and inconvenient – and you could end up losing your car.”

Do you think road tax is too expensive? Let us know in the comments...