The first model from the Volkswagen I.D. brand is arriving in 2020. We lift the lid on the new car, the concept, and the tech we expect 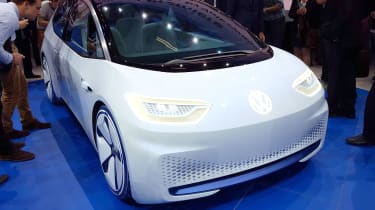 Every revolution must have a first step. Over the years, Volkswagen has introduced more than its fair share of revolutionary vehicles, including the Beetle and Microbus, different generations of the Golf that have set new standards as well as the high-performance GTI. But the next revolutionary Volkswagen could be the most important, and the most groundbreaking, of them all. Later this year the production version of the I.D. will be revealed, and the first step in Volkswagen’s pure-electric future will be realised.

The I.D., and the family of models that will join it in years to come, is a clear line in the sand between current EVs – such as the e-Golf, based on existing vehicles that are also available with conventional engines – and dedicated models designed as pure EVs from the ground up. This no-compromise design will really change the way people think about battery power.

Any modern car has to offer space not only for its human occupants but also the mechanical elements that enable it to operate. The engine, gearbox, clutch and cooling system all take up room that increases the size of the car overall. Where the I.D. is different is that its powertrain is packaged into a much smaller design; not only is the electric motor far more compact, the car also doesn’t require a large gearbox, clutch or drivetrain components to power the rear wheels.

It will be the first Volkswagen to be built on a new architecture called MEB – which translates to Modular Electronic Drive Matrix – and will form the basis of more electric Volkswagens in the future.

What that means for the driver and passengers is a huge amount of interior space. The I.D. is slightly shorter than the e-Golf, but because it doesn’t need to accommodate an engine and ancillaries up front, its nose is considerably shorter, which allows more passenger space. In fact, it’ll offer more room inside than the far larger Passat, despite being substantially shorter. Better still, there’s also no call for a bulky transmission tunnel running the length of the vehicle, so the interior of the I.D. can be completely flat, giving it a more open feel.

This idea is called Open Space, as Klaus Bischoff, Head of Design for Volkswagen, explains: “Before we first put pen to paper on the drawing board for the I.D. project, we debated the topic of 'Mobility in the future' at length. It is clear that the car of the future, and thus the mobile space, will be a place of communication more than ever before. The Open Space in the I.D. is just such a place.”

Another advantage of the unique design is that the battery packs in the I.D. can be mounted low down beneath the floor. Not only does that bring advantages in terms of space efficiency and make the car more secure and stable to drive, it also allows a larger number of cells to be installed to boost both its power and range. With 170PS from its electric drivetrain, the I.D. can go from 0-62mph in less than eight seconds – two seconds faster than the e-Golf – yet it will offer a range of between 200 and 350 miles on a single charge, comparable to a car with a conventional engine yet running purely on electric power.

The benefits of this are clear, as Head of Design Klaus Bischoff reveals. “The electric powertrain gives our designers far greater freedom,” he says. “We have shrunk the cooling grilles to a minimum, shifted the axles far outwards and created breathtaking proportions, as demonstrated by the I.D. – an icon of the future.”

The arrival of the I.D. this year already has huge significance, but future versions promise even more, with fully-autonomous driving expected by 2025. The all-electric powertrain makes it much easier to automate the driving process, and the I.D. is packed with technology to read and understand the road ahead. Four laser scanners constantly monitor the surrounding environment, and this is backed up by ultrasonic and radar sensors and cameras, while data is also collected by the I.D. from other vehicles and road sensors. 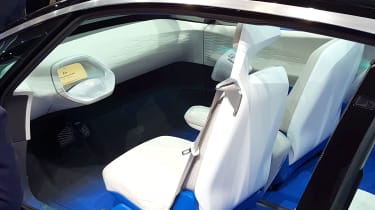 The driver can take control at any time for as long as they wish, always backed up by the sensors monitoring the road conditions, and a push of the button allows the vehicle to take full control. Autonomous driving opens up a new world of possibilities for relaxed, enjoyable transportation with complete independence and marks a huge step to boosting safety for I.D. occupants and other roads users alike.

The I.D. is not only a milestone in its own right, but also represents the beginning of a whole range of vehicles that builds on the same technology to open up greater possibilities. The I.D. Buzz will see the rebirth of the Microbus for the 21st Century, mixing the legendary style and practicality of the original with cutting-edge electrification of I.D. technology. It promises a driving range in excess of 300 miles, impressive performance and all the space benefits buyers will expect – the I.D. Buzz can seat eight people with huge flexibility. 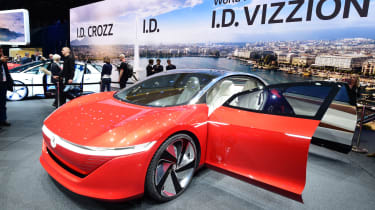 Looking even further ahead, the I.D. CROZZ mixes elements of an SUV and a four-door coupe, showing that electric cars can be dynamic and exciting as well as efficient and environmentally conscious. With power delivered to all four wheels, it has superior traction and grip, sending 305PS to the road in all conditions. Crowning the I.D. range will be the I.D. VIZZION, a pure-electric saloon similar in size to the current Passat but with a vast interior space, thanks to the space efficiency of the MEB technology. It’s set to arrive on our roads by 2022.

For more information on the Volkswagen e-Golf, visit volkswagen.co.uk