Lister has launched a convertible variant of its Jaguar F-Type-based LFT-666, in a limited production run of only 10 units 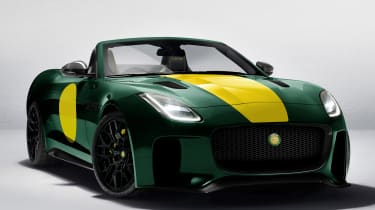 Lister has announced a convertible version of its tuned Jaguar F-Type, called the LFT-C. The limited-edition model will be priced from £139,000 when it reaches the UK market this summer. Only 10 units will be built, with each featuring a numbered solid silver plaque on the engine cover.

The LFT-C uses the same tuned 5.0-litre supercharged V8 engine as the LFT-666, with 666bhp and 976Nm of torque. Lister claims a 0–62mph sprint of around three seconds and a top speed in excess of 205mph, making it the fastest convertible model the company has produced to date.

Upgrades over the standard F-Type convertible include a set of 21-inch alloy wheels, a louder custom exhaust, uprated suspension and bigger brakes. As with the hardtop, the LFT-C gets a unique bodykit designed by Lister, with fresh front and rear bumpers, new side skirts, a redesigned splitter, an updated diffuser, flared wheel arches and a lip spoiler.

Buyers will be given a range of customisation options, with a “limitless” number of paint finishes and wheel designs available to order. The LFT-C also benefits from unique hand-stitched leather upholstery, a re-trimmed dashboard, new floor mats and Lister-branded treadplates.

For those who find the standard F-Type R’s performance more than adequate, Lister is also offering its bumper, badge and wheel upgrade as a separate £9,750 aftermarket addition for both the convertible and hardtop Jaguar models. Cars with only these body enhancements will be badged simply as ‘LFT,’ without the ‘666’ or ‘C’ suffixes.

The LFT-C will soon be joined by the reimagined Lister Knobbly, the Lister Costin and a modified version of the Jaguar F-Pace, called the LFP. Production of these four models will be spread between Lister’s new £6million facility in Blackburn, Lancashire, and the firm’s existing production site in Cambridgeshire.

What are your thoughts on the new Lister LFT-C? Let us know in the comments section below…