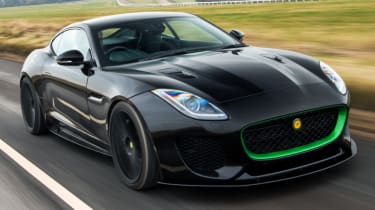 The Lister Thunder turns the all-wheel drive Jaguar F-Type R into an even more handsome, luxurious and potent coupe with an engine that, quite fittingly, sounds like an apocalyptic thunderstorm. It’s probably a bit too loud and the suspension setup still needs fine tuning, but there’s plenty of potential in this bespoke, British-built super coupe. If you want one, you’ll have to move fast, because when it announced the car, Lister took more than 20 deposits in 24 hours – and there will be just 99 of them in total.

People hear the Lister Thunder long before they see it, thanks to its deafening QuickSilver exhaust and aggressive engine remap. But when they do see it, they aren’t disappointed.

Based on a Jaguar F-Type Coupe, the Thunder gets a set of 21-inch wheels and lowered suspension, as well as special paint and badges. It looks even more arresting than the standard car, and even a little mysterious. Tell on-lookers that it has 666bhp and a claimed top speed of 208mph, and they’re not surprised.

Lister has been associated with Jaguar since the late 1950s, when it created the D-Type-based Lister-Jaguar ‘Knobbly’ racer. The company branched into road cars in the ‘80s with modified XJ-Ss, but hasn’t made another since the Lister Storm of the early nineties. 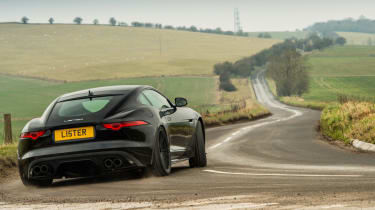 Since 2013, Lister and its related companies have been owned by Andrew and Lawrence Whittaker, the father and son better known for their Warrantywise business. Having started with a small series of ‘continuation’ editions of the venerable Knobbly, they then set about creating a new road car based on the F-Type.

Under the skin, the car you see here is an F-Type R Coupe. Thanks to that engine remap, new exhaust, higher supercharger boost and new intercoolers, the 5.0-litre V8 now produces a dyno-confirmed 670bhp. But the Whittakers tell us “666 is more evocative”, hence the figures you read in our spec panel. Adjustable KW suspension is fitted along with those enormous, 21-inch diameter Vesson alloy wheels, which come shod with super-low-profile Michelin SuperSport tyres.

The cockpit is completely re-trimmed in Bridge of Weir leather with contrasting green stitching, including the headlining and steering wheel. In fact, the only Jaguar branding left is the leaping cat on the steering wheel. The sill plates, spoiler badge, bonnet vents and even the pop-out door handles get Lister branding. It looks fabulous, though, almost like an exaggerated styling sketch or motor show concept car.

The noise of the V8 dominates the first few miles – the car absolutely living up to its name with a rock concert level of sound coming from the tailpipes under hard acceleration. Lift off and you find yourself amidst a firework display, with endless bangs and crackles on the overrun. It could well be the loudest road car we’ve ever driven, in fact. Top-end power isn’t stunning but there’s serious low-down shove, which the standard four-wheel drive contains even in the wet – as long as the car is pointing in a straight line. 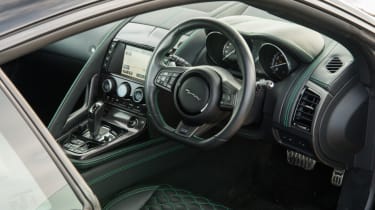 This is Lister’s prototype so the set-up has not been finalised, but we did have ride-height issues. With the car in its softer suspension setting the rear wheels made light contact with some part of the body over big bumps, and we actually lost a low-hanging rear suspension brace in one impact. As it turned out, when the roads dried and we switched the dampers to their firmer setting, the car felt considerably better, with superb control, loads of grip and effortless cross-country pace. You do still have to watch out for pot holes in town though, with so little sidewall to protect those gigantic rims.

The Thunder will be built in limited numbers – just 99 are scheduled be made – and each will cost a whisker under £140,000. That includes the price of the new £91,000 F-Type R Coupe on which it’s based. For us, they could tone down the exhaust and still have a great sounding supercar, and we look forward to trying the finalised suspension set-up.

Reaction has been very positive and it’s got Lister thinking about other Jaguars it could tune. First in its sights, according to Whittaker, is Project 8, Jaguar’s limited run, 592bhp super-XE.

Enjoyed our review of this British performance car? Then why not take a read of our road test of the rear-wheel drive Audi R8 RWS?