The V8 Jaguar F-Type R Coupe will excite drivers on the track and the open road, but would you expect any less with 542bhp? 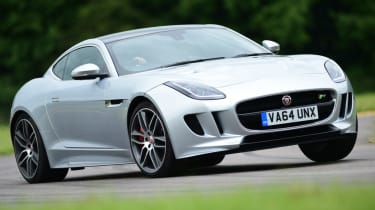 The Jaguar F-Type R Coupe is one of the most desirable sports cars around. It’s gorgeous and wild enough to be considered against, say, Aston Martin’s V8 Vantage. The V6 has the sweeter handling balance but if you want the full drama and sense of occasion that the F-Type can deliver, the full-fat V8 is where it's at.

The V8 Jaguar F-Type R Coupe arrived less than a year after the convertible F-Type launched to the world, and in the process became the most potent, most performance orientated F-Type ever to grace the roads. It has since been outdone by the fire-breathing F-Type SVR, but as that is another £20,000, significant improvements were to be expected.

A new Jaguar F-Type will set you back between £51,000 and £113,000, meaning it competes with a wide variety of accomplished opponents, the Porsche Cayman, 911 and Aston Martin Martin V8 Vantage to name but a few. For a sports car the F-Type comes with a surprising list of powertrain and drivetrain options, with rear-wheel drive and all-wheel drive, manual transmission and automatic transmission and V6 and V8 models all being available. However the F-Type R Coupe’s set-up puts the emphasis strongly on performance.

At launch, Jaguar claimed that the F-Type Coupe takes things to the next level. No pressure, then. But with graceful lines and muscular rear haunches that blend seamlessly into the curved roof, the Coupe looks just as stunning as the soft-top, and more. 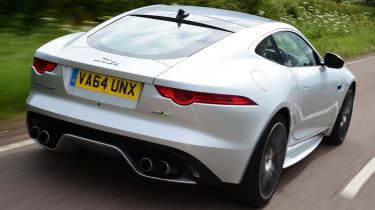 The tinted glass of the optional panoramic roof runs in a beautiful arc from the windscreen to the base of the E-Type-inspired tailgate, while the deployable spoiler is neatly integrated into the boot. At the front of the car, the taut proportions and stunningly detailed lines of the Convertible remain unchanged.

The F-Type range is kicked off with a 2.0-litre 4 cylinder, with the coupe version costing £5,485 less than the ragtop. If you are prepared to spend another £3,000 (for either body style) you could get yourself a 335bhp V6, which gives the same 0-60mph time, top speed and economy irrespective of whether it is fitted to the coupe or convertible.

The F-Type R is powered by a 5.0-litre V8 producing 542bhp and 680Nm of torque. The colossal power allows the Jag to sprint forward from 0-60mph in 3.9 seconds before charging on to a limited top speed of 186mph – figures which put it up against some very serious rivals. 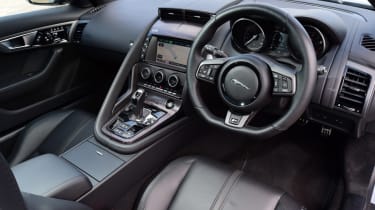 At the very top of the F-Type pile is the SVR model. These have an extra 25bhp and 20Nm of torque pushing the figures up to 567bhp and 700Nm. Should you need to get away from the lights in a hurry, you will be able to accelerate from 0-60mph in 3.5 seconds, before topping out at 200mph.

Floor the throttle and there’s a deep rumble and a surge of acceleration, and the R squirms as the tyres struggle to put down all that power. It’s an intense experience, and anyone who believes a dual-clutch gearbox is the only choice for sports cars should just try the F-Type’s excellent eight-speed auto.

As you’d expect, the R has been tuned to cope with the extra performance. The rigid Coupe body has allowed engineers to increase the suspension spring rates front and rear, while the adaptive damping has been – in engineering speak – optimised. And, in a first for Jaguar, the car also features torque vectoring by braking, which works alongside a new second-generation version of the brand’s electronic active differential to tame the power. 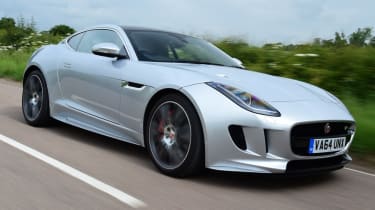 Every F-Type we’ve driven so far has been a delight, and the R is no different. It gives you an immediate sense of balance and connection with the road, with hydraulic steering that has seemingly perfect weighting and feel. Body control is faultless, too. With plenty of front-end grip, the R turns in quickly and accurately, allowing you to confidently place it on the entry to a corner.

The V8’s weight means you can feel the inertia transferring to the loaded front wheel in long bends, yet the torque vectoring gently brakes the inner wheels to dial it out. You’re likely to feel the benefit of this even more on the road, but our time with the car was limited to some laps of Barcelona’s grand prix circuit.

On the exit of corners it’s easy to gently transfer the loss of grip to the rear axle using the throttle, and with the freedom of the race track we were able to drive with the stability control off, and execute some beautifully balanced oversteer. 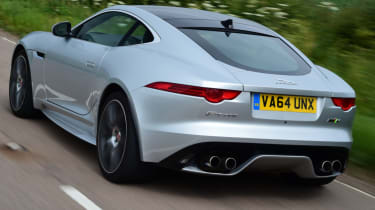 The revised E diff, which now goes from open to locked in 20 milliseconds, works well, but there’s always enough power to overcome traction. Still, the extra rigidity and tauter body control mean the Coupe reacts to throttle and steering inputs even more precisely than the Convertible.

To cope with the straight-line pace on tap, the R is offered with optional ceramic brakes. On the track they repeatedly reined the car in from more than 150mph with decent resistance to fade. Also, a clever speed-related fluid preload set-up primes the brakes as soon as you lift the throttle, to ensure there’s pedal pressure and feel the instant your foot hits the stoppers.

Our drive was over all too soon, but it’s clear the engaging and evocative R takes the F-Type to the next level. It looks, sounds and feels amazing, delivering the bravado of a muscle car with the style, comfort and agility of a thoroughly modern 21st century sports car.